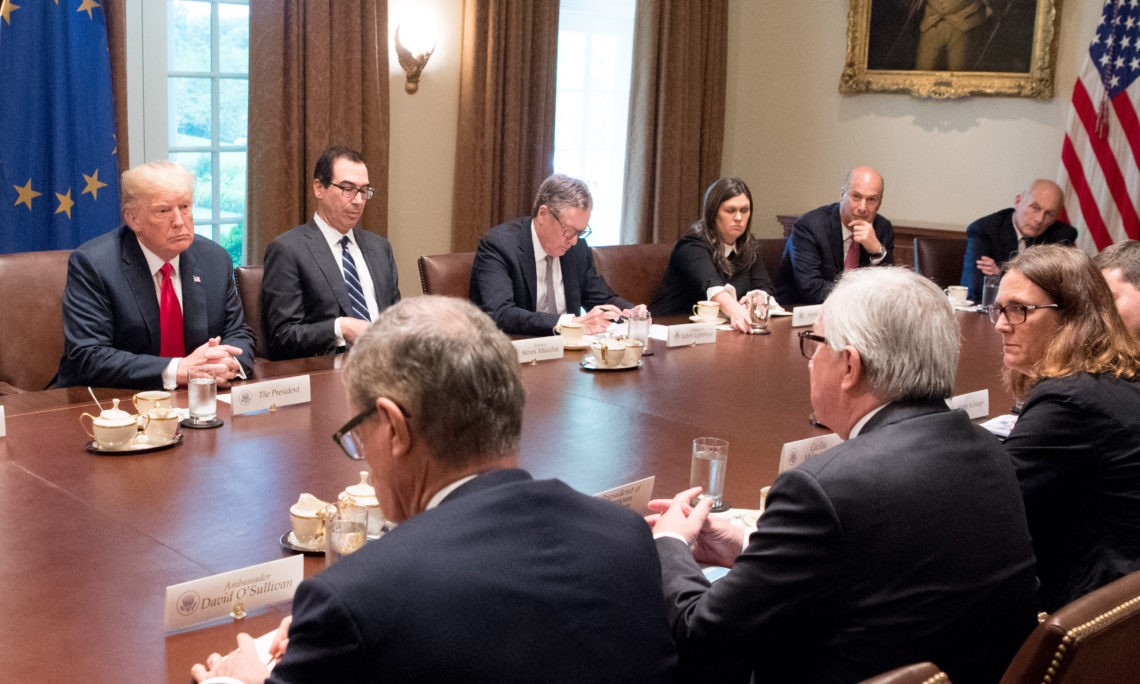 Visit of Jean-Claude Juncker, President of the EC accompanied by Cecilia Malmström, Member of the EC to the United States of America. Photo: © European Union.

Reinvigorating how the US Mission to the EU does business.

Politico Europe (Sept 7, 2018) – BRUSSELS — Spend time in Europe or the United States these days and you will see a lot of handwringing about the state of the transatlantic relationship, and even hear questions about its relevance. These concerns ignore a key fact: Our relationship has faced and overcome disagreements big and small since the very beginning.

Anyone who grew up during the Cold War saw the strength and resilience of the U.S.’s engagement with Europe — a resilience based on the unshakeable values we share. I still firmly believe that engagement is indispensable and irreplaceable as we seek to promote security, address shared global challenges and advance the prosperity of all our citizens.

I was in the room and saw the commitment to the transatlantic relationship reinforced just this summer by U.S. President Donald Trump and European Commission President Jean-Claude Juncker as they launched a new phase in the relationship between the U.S. and the European Union to bring freer, fairer and more reciprocal trade to both sides of the Atlantic. I have heard this commitment emphasized in every one of my meetings with EU counterparts and senior U.S. government officials.

I am not trying to sweep aside our differences. On the contrary, I think we should meet them head on, and one of the key strengths of the U.S.-EU relationship is our ability to talk candidly and freely about our differences. That is not an advantage we enjoy with all our partners, and we should not lose sight of its importance.

Through frank discussions, I firmly believe we can come to concrete agreements that advance our common interests rather than falling into the pattern I saw under some previous administrations, where warm handshakes and friendly smiles failed to achieve anything beyond a nice photo opportunity.

As the U.S. ambassador to the EU, it will be my mission to strengthen the transatlantic partnership and nurture its transformative power to create mutual security and prosperity — even at the cost of some uncomfortable conversations.

To bring the relationship to its potential, I am reinvigorating how the U.S. Mission to the EU does business based around three priorities. First, I will build and maintain the strongest possible relationships with the EU’s leaders and decision-makers, which will allow us to cut through bureaucracies and advance key policy goals.

Second, my team and I will seek bold new ways to increase transatlantic prosperity and ensure the best possible outcomes for the citizens of the U.S.

Third, I pledge to work with the EU honestly and constructively to address the global security threats that seek to destroy our shared history, values, and culture. Whether defeating the Islamic State, countering North Korea’s belligerency or ensuring energy supplies will never be used for political coercion, we will stand together.

So let’s start big, and no economic relationship is bigger than the U.S.’s with Europe. The transatlantic market accounts for one-third of global GDP. A stock of $5 trillion in two-way foreign direct investment fuels annual trade of $1.1 trillion in goods and services, supporting up to 15 million jobs on both sides of the Atlantic.

The July announcement by Presidents Trump and Juncker was an important breakthrough, and a perfect example of the triumph of practical vision over unfounded negativity. While pundits were predicting the death of the transatlantic relationship I stood with the presidents, and with them watched the television in chuckling disbelief as we hammered out the details of our joint declaration.

Now we must maintain the momentum and positivity of that meeting and see beyond the details that could sidetrack us from President Trump’s vision of free, fair and reciprocal trade.

I recently spent two weeks meeting some of our great American companies based on the West Coast of the U.S. Those meetings made it clear to me that U.S. companies want to do more in the EU — creating more American jobs by bringing more world-beating American products to European consumers.

To maximize our trade and investment potential we will need to reduce barriers, but I believe those can all be overcome, as long as the U.S. and the EU are willing to work together and have the frank discussions I mentioned above. To give you some sense of the importance the administration places on our trade relationship, just look to the frequency with which senior officials from both sides of the Atlantic have been meeting in recent months.

We cannot talk about trade without talking about China, and here again I see real opportunities for the transatlantic relationship to be a force that curtails Chinese economic aggression and unfair trade practices — concerns shared by both the U.S. and the EU. I foresee opportunities for cooperation to address overcapacity, theft of intellectual of property, forced technology transfer, investment security, subsidies and reform of the World Trade Organization.

We all share an interest in seeing China offer greater market access and eliminate unfair trade practices, and together we can insist China take the necessary steps to allow its economy to operate more fairly.

Beyond trade, there are a wealth of issues we can tackle together. From malign Russian activity (ranging from disinformation campaigns to invasion and occupation of sovereign nations), to data privacy, to Iran — yes, even Iran — we work best when we work in tandem.

I have already rolled up my sleeves, and my terrific team and I are focused on delivering results. We invite our EU counterparts to join us!