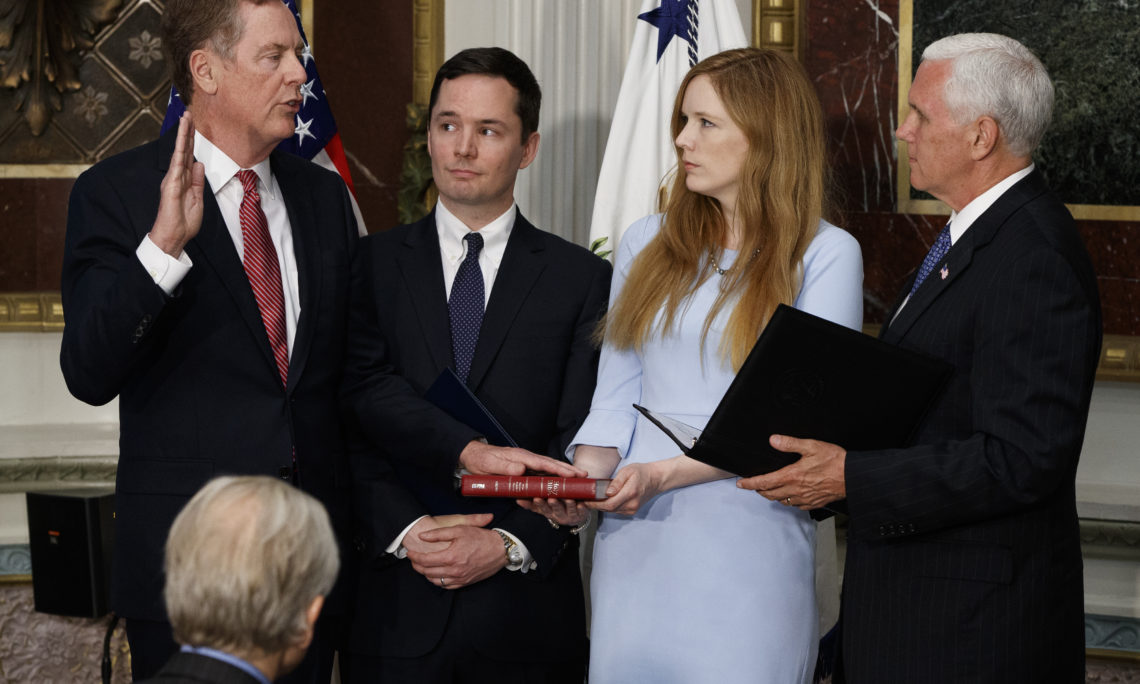 The White House
Office of the Vice President
For Immediate Release

Remarks by the Vice President and U.S. Trade Representative Lighthizer at a Swearing-in Ceremony

THE VICE PRESIDENT:  Well, thank you, Senator.  And to all of our honored guests, good afternoon.

On behalf of the President of the United States, today it will be my great privilege to administer the oath of office to the 18th United States Trade Representative — Robert Lighthizer.  (Applause.)

And with this ceremony, President Donald Trump’s Cabinet is finally complete.  (Applause.)

First off, join me in welcoming his daughter Claire, his son Bob, Jr.  (Applause.)  And Bob, Jr. has his family with us, as well, including two of his dad’s grandchildren.  Penelope and Emmet are with us today.  Thank you so much for coming.  (Applause.)

I am grateful to be joined by a friend and a colleague of so many years of our new U.S. Trade Representative, Senator Pat Roberts.  Thank you for your great leadership for the people of Kansas.  And I must tell you — though I could tell by the response of this crowd just a few moments ago — it is always an honor to be with Senator Bob Dole, one of the greatest Americans of the last century.  (Applause.)

To hear Bob Lighthizer tell it, he learned everything that he knows from Bob Dole, serving with him for nearly a decade and a half in his Senate office.  And, Senator, it’s great to see you here, and we’re honored by your presence.

President Donald Trump made a promise to the American people — to fight for trade that puts America first.  And in choosing Robert Lighthizer as the U.S. Trade Representative, President Trump is keeping his promise to put America first.  (Applause.)

Robert Lighthizer is uniquely qualified for this vital role because he’s frankly one of the leading experts on trade in all of America.

Bob’s distinguished career stretches back to the 1970s.  He worked as a lawyer in private practice before joining the Senate Committee on Finance, where he eventually rose to serve as chief counsel and staff director.

As his reputation grew, President Ronald Reagan took notice.  In 1983, the President named him as the deputy U.S. trade representative.  In this capacity, he directly contributed to the renewed growth and prosperity of that era by negotiating more than two dozen bilateral trade agreements with nations all across the wider world.

For the past 30 years, Robert has represented the American businesses that are the beating heart of our economy as a trade litigator.  From manufacturing to agriculture, high-tech to financial services, Robert Lighthizer has distinguished himself as a tireless defender of America’s workers and America’s future, and now he’ll be doing it for the United States of America.  (Applause.)

Robert, President Trump has now called on you to bring your extraordinary career and considerable talents to help us restore trade that is both free and fair — benefits the American people above all else.

Given your experience, your integrity, and your unwavering commitment to promoting America’s interests and protecting the economic prosperity of the American people, President Trump and I are confident that with you as the United States Trade Representative, we will continue to restore opportunity and prosperity for working Americans for generations to come.  And we will make America prosperous again.  (Applause.)

So, on behalf of President Donald Trump, it is now my great privilege to administer to you the oath of office.

(The oath is administered.)  (Applause.)

AMBASSADOR LIGHTHIZER:  Thank you so much, Mr. Vice President.  Thank you for doing me the honor of being here today.  It’s a great privilege to be in this administration, but to have the Vice President administer the oath is a special privilege.  And I would like to thank you for all you do, including particularly Thursday’s speech, which I thought was quite meaningful and very important.

I would like to thank the Chairman of the Agriculture Committee, Senator Roberts, who is really important because he’s on the finance committee, however.  (Laughter.)

And I’d like to thank Secretary Ross who was here, but mostly Senator Dole, who I — when I had my hearing I said, I wouldn’t be here but for you.  And he said, no, no, no.  I said, people say that, but it’s in fact true this time.  (Laughter.)

So you’re a great American and a great mentor, and I’m blessed to have you as a friend.

My close friends, many of whom are here today, know that I read a lot of history and particularly presidential history.  And I believe that when all the dust of partisan vitriol has settled and serious people provide thoughtful analysis, the Trump administration will be ranked as one of the greatest in American history.  (Applause.)

I am grateful to have been asked by the President to serve him on this very important issue of international trade.  I further believe that when my grandchildren, who are here today, talk to their grandchildren, they will say that President Trump permanently reversed the dangerous trajectory of American trade, put America first, made our farmers, ranchers, and workers richer, and the country safer.

And I hope I can make some small contribution to that accomplishment.  Thank you all very much for being here.  I’m very grateful for your friendship.  (Applause.)