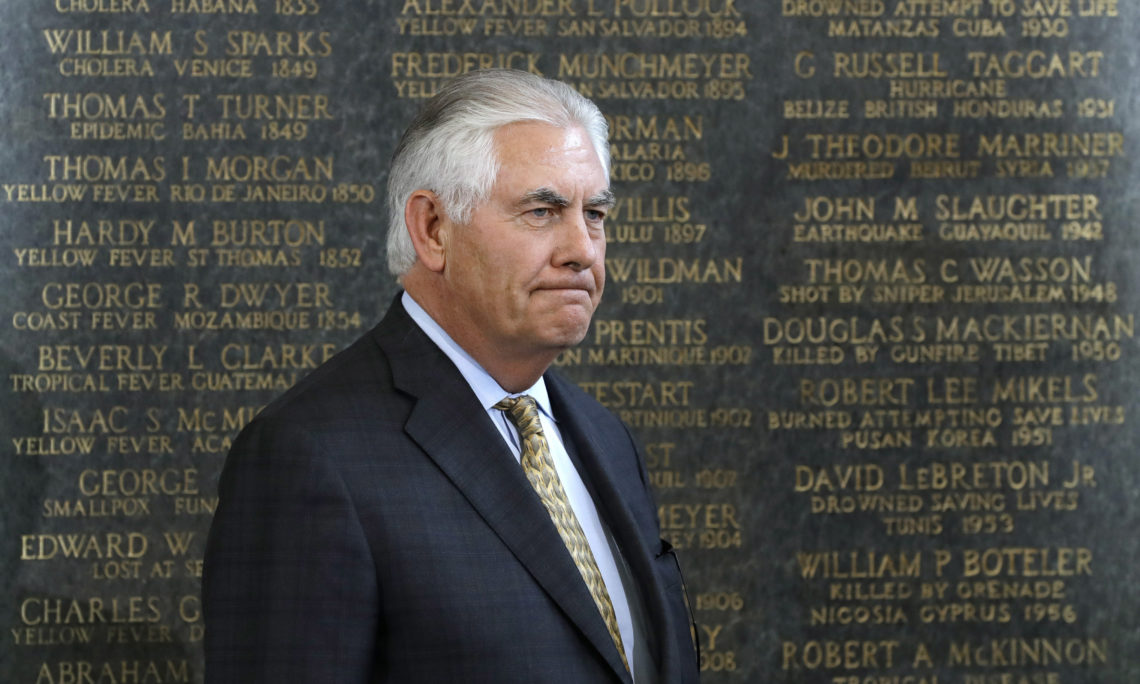 SECRETARY TILLERSON: Thank you, Barbara. I also want to thank our Armed Forces Color Guard for the presentation of the color, and obviously, for their service to our country.

And I would say I was surprised and delighted to see one of my staff, Katie Nutt, singing the national anthem, but she did sing Happy Birthday to me – (laughter) —

MS NUTT: When I had laryngitis.

SECRETARY TILLERSON: — when she had laryngitis. So I think she wanted an encore performance to prove to me how well she could sing, but she did a fantastic job. Thank you, Katie.

I also want to take a moment to thank Senator Dan Sullivan. I don’t know if Senator Sullivan made it over today; I know he intended to from Alaska. And I wanted to make a comment on Senator Sullivan. Some of you may already be aware he is in the process of creating a Foreign Service caucus for former Foreign Service members that are serving in the – on the Congress, on the Hill, and I think it’s just a – it’s a fantastic initiative on his part, and one that I think is – will serve us well, it will serve all of you well, and gives us yet another voice on the Hill to represent the interests of not just the Foreign Service officers, but I think the entire State Department. So if you have a chance to see Senator Sullivan, please express your appreciation for his leadership in this particular initiative of his.

I also want to thank and recognize as well the leaders of the other foreign affairs agencies – USAID Acting Administrator Wade Warren – Wade, glad you’re here – FSC Acting Director General Judy Reinke, and Associate FSA Administrator Bryce Quick, and BBG CEO John Lansing. Thank all of you for being here.

It’s been my great privilege to take part in the American Foreign Service Association’s Memorial ceremony honoring the service and sacrifice of the men and women who did not make it back. Even amidst the non-stop business of the State Department, and while we work at a pretty torrid pace, I think it is always important to set aside time to pay tribute to our fallen colleagues.

Although he was unable to be here today, President Trump also released a statement sending his greetings and sincere gratitude to all members of the United States Foreign Service and Civil Services at federal agencies here at home as well as at embassies and consulates around the globe. As I have gotten to know the President, I have seen firsthand how much he appreciates – and that appreciation is growing, I assure you – for the work of our hard-working public servants here, and those who serve on behalf of the nation around the world.

Each of the 248 fallen heroes and heroines whose names are engraved on the Memorial Plaque represents a unique individual life, and I think we can never lose sight of that. These men and women had families, they had loved ones they left behind, dreams unlived, plans unrealized. These names span our country’s history. From the beginning of our young republic, Americans have gone abroad representing our country, advancing our interests and values, and raising our flag. Today, I’d like to share with you some of their stories.

The first name on the plaque is William Palfrey. In 1780, this Revolutionary War veteran and former aide to George Washington was unanimously confirmed by the United States Senate to be U.S. consul general to France. Palfrey, who had served as paymaster general of the Continental Army with the rank of lieutenant colonel, set out on his sea voyage on December 20th, but was never heard from again. The citation underneath his name reads “lost at sea.” He was 39 years old.

A graduate of Bryn Mawr College in archaeology and later the University of Pennsylvania Law School, Margaret Ruth Alexander worked as a law clerk for the U.S. District Court for the District of Delaware before joining USAID in 1987 as a legal officer for the Office of the General Counsel. Margaret later served as senior regional legal advisor in East and Central Africa, the Caribbean, and Western and Central Africa; assistant general counsel for the Europe and Eurasia Bureau; and chief of the regional legal office in Southern Africa.

Her final post was as deputy mission director in Kathmandu, Nepal, where she died in a helicopter crash on September 24th, 2006. She was 56 years old. Her sustained exemplary performance earned her USAID’s Superior Honor Award for providing legal services while in East Africa and promotion to the rank of counselor within the Senior Foreign Service. She had recently been named the USAID director to the Democratic Republic of Congo, a post she would have assumed the following year.

Just a few short weeks ago, family, friends, and colleagues of Anne Smedinghoff gathered here to honor her memory on the fourth anniversary of her tragic death in 2013. Born in 1987 in River Forest, Illinois, she graduated from Johns Hopkins University with degrees in international studies and Spanish in 2008. Smedinghoff joined the Foreign Service two years later as a public diplomacy officer. Anne worked as an assistant information officer in the Public Affairs Section of the U.S. Embassy in Kabul, Afghanistan, where she helped strengthen relations between Afghans and Americans. On April 6, 2013, Anne was on a mission to deliver books to a school in Qalat, Zabul province when a suicide bomber killed her and four more Americans.

William Palfrey, Margaret Ruth Alexander, and Anne Smedinghoff all embodied our country’s greatest ideals and they believed in using diplomacy and the tools of statecraft to promote them. I wish we had enough time to tell the story of each name. They deserve it. I do take solace in the fact that we did not have to add any names to this plaque this year, but I know our men and women always put mission first, and though they are judicious and they take the necessary security precautions, there are inherent risks in all we do to advance America’s interest and values to keep our nation safe. As your Secretary, I promise you I will do all I can to make sure we are not forced to add another name to this wall, by making the safety of our people my highest priority, and by asking all of you to do the same, and taking action to bolster the protection of our people around the globe.

Our diplomats and foreign affairs professionals could have used their many talents in other ways, but they and you chose service, to represent our country in an uncertain and dangerous world. These 248 men and women died as they lived, in service to others. Today, the Department honors their memory and contributions, and a grateful nation expresses profound appreciation for their courage and their commitment.

And now I ask you to join me in a moment of silence while the wreath is placed.

(The Wreath was laid and a Moment of Silence was observed.)