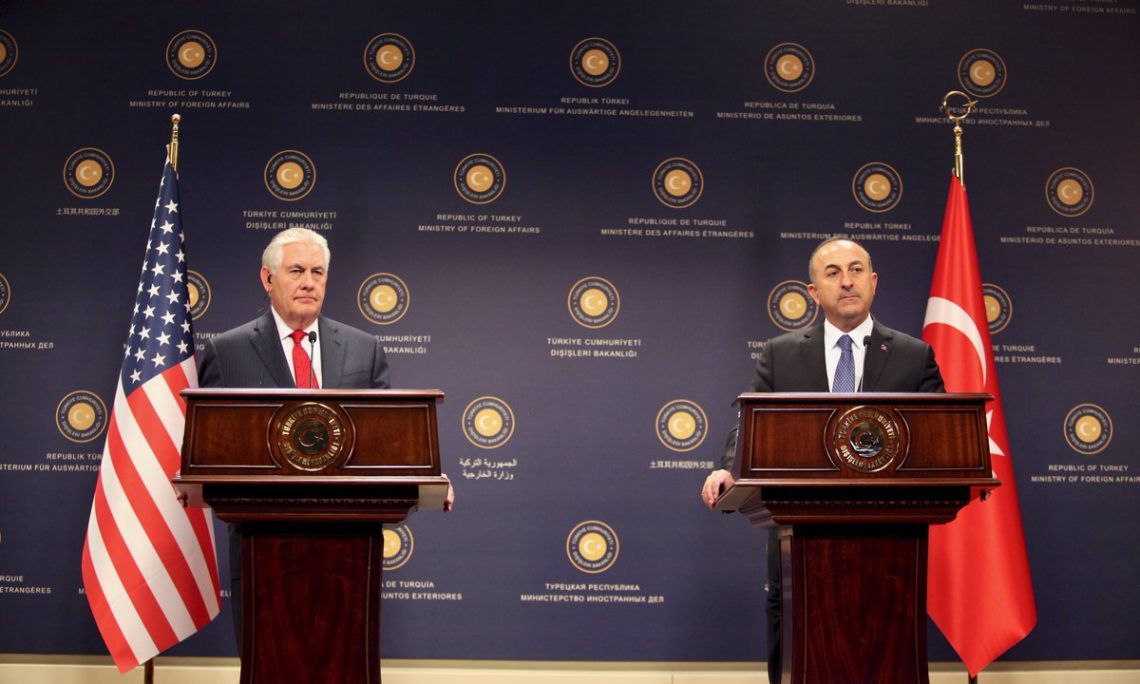 SECRETARY TILLERSON: (In progress) Minister Cavusoglu, and I am privileged to be visiting Turkey today, a NATO ally and a friend of the United States in a very turbulent part of the world. I met with President Erdogan and the foreign minister to convey President Trump’s commitment to strengthening the relationship between our two countries.

Today’s conversations built on three mutual long-term goals: working together to defeat Daesh/ISIS; building stability in the region; and bolstering economic ties between our two nations.

Turkey’s been a NATO ally since 1952, and we continue to exercise military cooperation in that alliance and in the global coalition to defeat Daesh. Our discussions today reaffirmed that we will prevent the resurgence of Daesh in previously held territory, and aggressively stop the emergence of new terrorist threats on the ground as well as the recruitment of terrorists online.

Over the past 18 months, the U.S. Military’s ability to operate from Turkish bases has enabled us to increase operations against ISIS by 25 percent without the utilization of any additional aircraft required. The Turkish Government has stopped the influx of foreign fighters into Iraq and Syria. Turkish troops have permanently pushed ISIS off the Turkish-Syria border. And the United States is grateful for Turkey’s important contributions as a member of the counter-ISIS coalition, including the participation last week of Foreign Minister Cavusoglu at the recent coalition meetings hosted by the State Department in Washington.

We stand alongside Turkey in their fight to stop terrorism directed against its country and its people. The PKK attacks in Turkey last year remind us of how close to home the threat of attack is for the Turkish people. We extend our condolences for all those who have been lost, who have lost those with loved ones to PKK terror, and we mourn the more than 70 Turkish lives lost inside of Syria in the brave fight against Daesh.

Turkey has shown leadership by helping to alleviate the ongoing refugee crisis stemming from the conflict in Syria. In four years, Turkey has accommodated more than 3 million refugees from Syria, Iraq, and Afghanistan, and done much to provide them food, shelter, health care, and education.

We look to Turkey as a key partner for stabilization effort in areas once held by ISIS and for ensuring our NGO and UN partners can continue to provide humanitarian relief services inside and outside of Syria. We commend Turkey for its efforts to find a peaceful solution to the nearly six-year Syrian conflict.

I also came here to deepen our countries’ trade and investment ties. Bilateral trade and goods between our two countries was more than $17 billion in 2016, and we’re eager to grow that number. American and Turkish scientists collaborate on research to improve energy efficiency, health, and education under the framework of the U.S.-Turkey Science and Technology Agreement. And we’re also fostering public-private partnerships that support technology-based innovation and entrepreneurship. We will work with the Turkish Government and the private sector to expand economic cooperation that benefits both of our countries.

The United States and Turkey share many broad goals for the region: reducing Iran’s ability to disrupt the region; finding a settlement in Syria that allows Syrians to return home; and supporting Iraqis to build a strong, independent, and inclusive government in Baghdad. In the United States, the people of Turkey have a trusted ally and a partner who is committed to its safety and security and advancing economic opportunity. We look forward to approaching these challenges together, and the Trump administration will continue to build ties with this longstanding ally and our friend.

And I thank the foreign minister for his hospitality today.

SECRETARY TILLERSON: Well, those were the subjects of our conversations today, to have an exchange of views regarding the most – the best way forward to secure areas inside of Syria, create zones of stabilization, to allow the return of people to Syria and to set the stage for a longer-term political solution. I think the exchange of views was very helpful to both of us today and we will continue to work together on the way forward.

In terms of the future of Raqqa, we look forward to the liberation of Raqqa and the return of its control to local – to its local citizens, its authorities, and to putting it under local control for security so that all of the Syrians who had to flee that area can return.

QUESTION: Thank you. Mr. Secretary, how do you convince the Turkish Government that partnering with Kurdish YPG rebels is essential in defeating ISIS when the government here calls that partnership an unacceptable one with a terrorist group?

And Mr. Foreign Minister, your governor has been highly critical of the United States over the arrest of Mehmet Atilla this week, saying you should have at least received advance notice of it. How has that impacted your discussions here today, and how do you respond to charges that Americans like Pastor Andrew Brunson are being arrested here to be used as a bargaining chip for the extradition of Pastor Gulen?

FOREIGN MINISTER CAVUSOGLU: Andrew Brunson and who else?

QUESTION: The arrest of Andrew Brunson. Oh, Mehmet Atilla – his arrest in the United States.

SECRETARY TILLERSON: Well, as I indicated in the previous response to the question, we had a very good discussion and conversation today both at the prime minister’s level and the president around an exchange of views of how best to secure areas going forward in Syria. We’re exploring a number of options and alternatives and we had a good discussion around those and there’s additional, I think, consideration on both sides yet to come.

SECRETARY TILLERSON: In response to the question regarding the notification, that is certainly the intent on the part of the consul office here, is to advise anyone when there’s been a change of status of their visa if we’re able to reach them. So that is a normal procedure.

QUESTION: Yes, good afternoon. Lesley Wroughton from Reuters. This is a question for Secretary Tillerson. The minister said that the – that you – that the United States has admitted there’s no difference between the YPG and the PKK. Do you believe that you have overcome your differences over this issue and that you can move forward concretely in Syria in the fight to retake Raqqa, given – if you’ve overcome those differences?

The other question I have is the previous administration said that Syrian President Assad must go. Nikki Haley said yesterday that the fight in Syria cannot move forward without the issue of Assad being resolved. How do you see that issue being moved forward as you move more aggressively on Raqqa?

SECRETARY TILLERSON: Well, again, I think on the question of how to carry forward with the defeat of Daesh/ISIS in Syria, let there be no mistake, just so we can be clear, there is no space between Turkey and the United States in our commitment to defeat Daesh, to defeat ISIS. Not just in Syria and Iraq, but as members of the greater coalition to defeat Daesh, anywhere Daesh shows its face on planet Earth, they will be confronted by the coalition to defeat them on the battlefield, as well as in the cyberspace and in the social media space.

So in terms of the tactics that are necessary to achieve that outcome, that is why we meet. That is why we meet with our very important partners here, as well as other very important coalition members who are engaged directly in the military activities in Iraq and Syria. So there is more discussion yet to be had regarding the way forward. What we discussed today were options that are available to us. They are difficult options, let me be very frank. These are not easy decisions. They are difficult choices that have to be made. So this has been very good, the conversations today were very frank, very candid, and we will be taking those conversations away. I know the foreign minister and the president and the prime minister, they will consider all of the exchanges we had today, but ultimately, Turkey and the United States will stay together in the fight as part of the broader coalition to defeat Daesh.

QUESTION: About President Assad, should he stay or should he go?

SECRETARY TILLERSON: I think the status and the longer-term status of President Assad will be decided by the Syrian people.