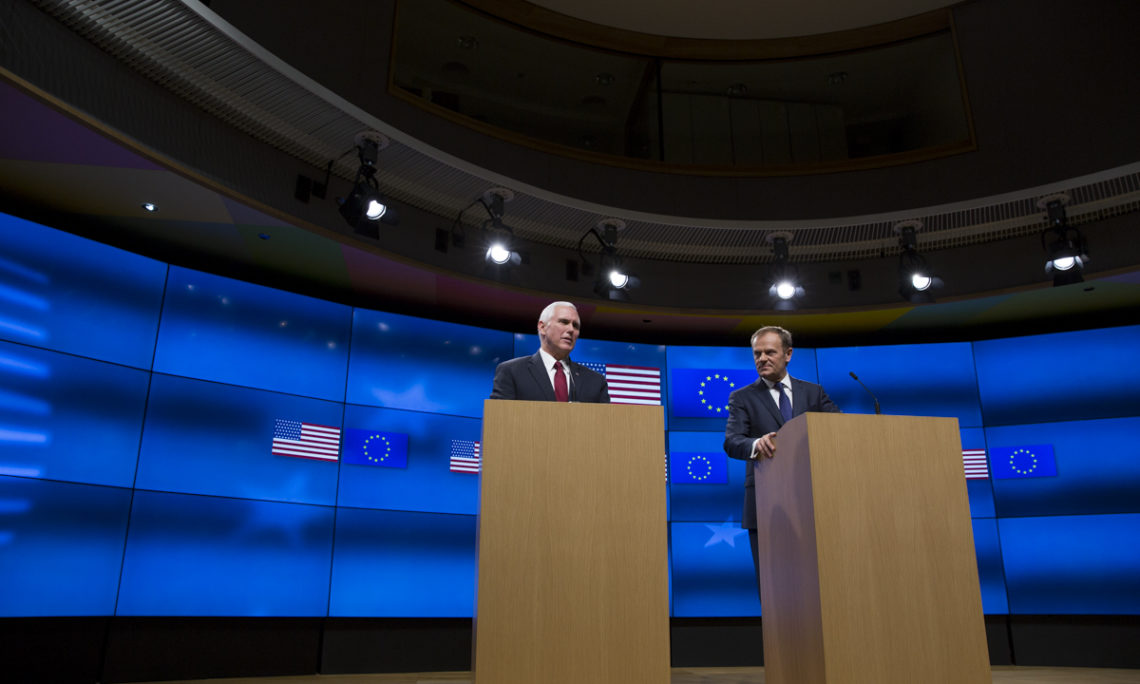 PRESIDENT TUSK:  Mr. Vice President, dear friends, let me first of all thank you for this meeting.  We all truly needed it.

Too much has happened over the past month and in your country and you; too many new and sometimes surprising opinions have been voiced over — in this time about our relations and our common security for us to pretend that everything is as it used to be.

And thank you for being so open and frank with me, Mr. Vice President.  Today I heard words which are promising for the future, words which explain a lot about the approach of the new administration in Washington.

I repaid our guest by offering honesty in my assessment of the situation.  I shared our concerns and hopes.  Given that I am an incurably pro-American European who is fanatically devoted to transatlantic cooperation, I could afford to be outspoken even more.

I asked the Vice President directly if he shared my opinions on three key matters:  international order, security, and the attitude of the new American administration towards the European Union.

Firstly, I expressed my belief that maintaining order based on the rules of international law where brute force and egoism do not determine everything lies in the interest of the West; and that maintaining that order can only be enforced through a common, mutually supportive and decisive policy of the whole of the Western community.  And for millions of people around the world, the predictability and stability of our approach provides the guarantee of, at the very least, hope that chaos, violence, and arrogance will not triumph in the global dimension.

Referring to some statements made in Munich just two days ago, I would like to say clearly that the reports of the death of the West have been greatly exaggerated.  Whoever wants to demolish that order, anticipating a post-West order must know that in its defense we remain determined.

Secondly, our security is based on NATO and the closest possible transatlantic cooperation.  We must work together to modernize the forms of this cooperation.  Some of them should, indeed, be improved.  But we should also, I believe, agree on one thing:  The idea of NATO is not obsolete, just like the values, which lay at its foundation are not obsolete.

Let us discuss everything, starting with financial commitment — but only to strengthen our solidarity, never to weaken it.

Thirdly, we are counting, as always, on the past; on the United States’ whole-hearted and unequivocal — let me repeat unequivocal — support for the idea of a united Europe.  The world would be a decidedly worst place if Europe were not united.

Americans know best what great value it is to be united, and that becoming divided is the prelude to a fall.  It is in the interest of us all to prevent the disintegration of the West.

And as for our continent, in this respect, we will not invent anything better than the European Union.

In reply to these three methods, I heard today from Vice President Pence three times, yes.  After such a positive declaration, both Europeans and Americans must simply practice what they preach.

On Saturday in Munich, you mentioned that during your trip across Europe in 1977 with your older brother, you found yourselves at some point in West Berlin, marveling at what you saw; then crossing through Checkpoint Charlie only to see the shadow of repression hanging over people.  If you know, I had been living under this shadow for over 30 years.  What I vividly remember from my own past is how after martial law was imposed in Poland on December 13, 1981, President Ronald Reagan urged all Americans to light a solidarity candle on Christmas Eve, as he did himself.

It is not difficult to imagine how this moving message of American solidarity with the oppressed Polish nation against, as Reagan said, the forces of tyranny and those who incite them from without, helped bring back hope and the determination not to give in.

In your speech, you also highlighted the historic role of some American and European leaders including Vaclav Havel and Lech Walesa.  I was lucky to cooperate closely with the two of them in difficult times.  Similarly to us, they all believed in the purpose of cooperation and solidarity between Europe and the U.S.  We cannot let their efforts go to waste.

After today’s talks, it will be easier for me to believe that we will fulfill this task.

And thank you for those eloquent words and your personal courage and leadership.  It’s an honor to meet you and on behalf of the President of the United States to bring greetings.  And I may make a note never to follow you at a podium again.  (Laughter.)  So thank you again for your eloquence.

Last night I was honored to have dinner with the Prime Minister of Belgium.  This morning I met with the European Union’s High Representative Mogherini.  And this morning, a very constructive and productive conversation with President Tusk, and it’s an honor to be here.

This afternoon, I will meet with President Juncker of the European Commission before taking meetings at NATO at returning to Washington, D.C.

Saturday, as President Tusk said, I was pleased to address the Munich Security Council to speak about the importance of the strategic alliance the United States entered upon so many years ago in the North American Treaty Organization.

But the President did ask me to come here to Brussels, to the home of the European Union, and deliver an additional message.  And so today it is my privilege on behalf of President Trump to express the strong commitment of the United States to continued cooperation and partnership with the European Union.

Whatever our differences, our two continents share the same heritage, the same values, and above all, the same purpose:  to promote peace and prosperity through freedom, democracy, and the rule of law.  And to those objectives we will remain committed.

This has been the European Union’s goal since before its formal founding in 1993.  What began as a modest Western European trade agreement in 1951 has grown into a commitment to the four freedoms:  freedom of movement — goods, capital, services, and people; a common currency; and a common approach to foreign and security policy.

And what began 60 years ago with the Treaty of Rome among six Western European nations has grown to encompass north and south, east and west; and you welcomed new states after the end of the Cold War.

Our economies are the world’s largest — accounting for half of the world’s economic output.  Transatlantic commerce supports 14 million jobs on both continents and improves the lives and well-being of all of our citizens.

And so today we reaffirm our commitment to free, fair, and flourishing economies that undergird our success, and to cooperation in achieving that.

Maintaining and strengthening our economic vitality will require hard but necessary choices.  Renewed growth means improved peace and prosperity for all.  We must be strong, and we must be united, as well, in our efforts to confront threats to Europe’s security and stability.

Let me say to this community, the European community, your losses at the hands of barbaric terrorists are felt equally in every household and every heart in America.  And you have our condolences and our determination to continue to do all that we can in partnership with the European Union and with all of our allies in Europe to ensure that such attacks never happen again.

We seek to take measures, and we call upon the European community to join with the United States in continuing to intensify our efforts to counter the threat of radical Islamic terrorism here on the continent.

Now, this will require greater coordination and intelligence sharing among EU member states and between the EU and the North Atlantic Treaty Organization.  And let me assure you, the United States is committed to continuing and expanding our collaboration on the collective security of all of our peoples.

The safety and security of your union and our people depends on that increased collaboration in the global fight against terrorism.  And the United States will remain a full partner with the EU and with all of our European allies to accomplish that.

In addition to confronting terrorism together, clearly we must stand strong in defense of the sovereignty and territorial integrity of nations in Europe.  In the wake of Russian efforts to redraw international borders by force, we will continue to support efforts in Poland and the Baltic States through NATO’s Enhanced Forward Presence Initiative.

And with regard to Ukraine, the United States will continue to hold Russia accountable and demand that Russia honor the Minsk Agreements, beginning by de-escalating the violence in eastern Ukraine.

While the United States will continue to hold to hold Russia accountable, at President Trump’s direction, we will also search in new ways for new common ground with Russia, which President Trump believes can be found.

The United States’ commitment to the European Union is steadfast and enduring.

President Tusk, President Trump and I look forward to working together with you and the European Union to deepen our political and economic partnership.  We are separated by an ocean, but we are joined by a common heritage and by a common commitment to freedom, to democracy, and to the rule of law.  And we’re confident that that bond will endure and grow in the years ahead as we meet our future together.

Thank you again for your hospitality, Mr. President.  And thank you all.