Home Home | News & Events | Remarks at Occasion of the Signing Ceremony for the Implementing Arrangement on Cooperation (Oct 17, 2016) 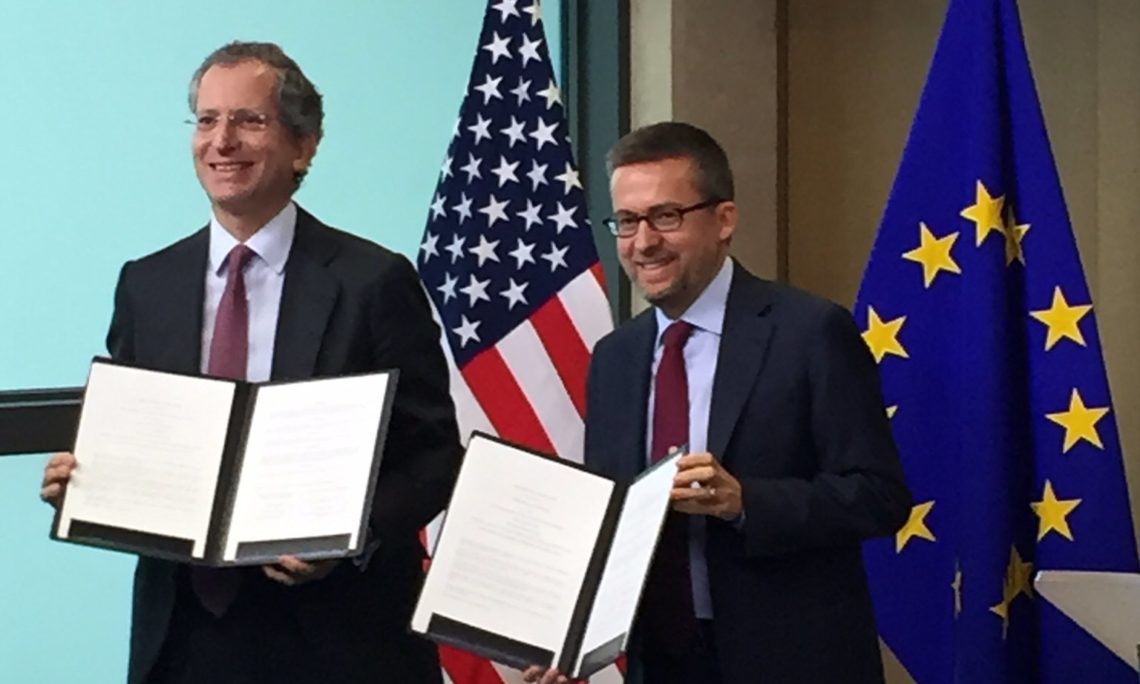 Thank you Commissioner Moedas for inviting me to today’s signing ceremony for the Implementing Arrangement between the Government of the United States of America and the European Commission to enhance transatlantic cooperation on science, technology, and innovation.

That is why I will start with highlighting some of our cooperation in space.

First, the United States and European Union have held eight civil space cooperation dialogues since 2005 focused on important priorities such as space science research, Earth observation, GPS-Galileo satellite navigation collaboration, and coordination on outer space diplomacy through multilateral international venues. Most recently, at the Commission’s request, the State Department coordinated a whole of government U.S. contribution to the development of the EU space strategy to be released in the very near future.

Second, I want to note that European researchers used satellites over the past week to help the U.S. monitor Hurricane Matthew. We are most appreciative of the EU activating the EU’s Copernicus Disaster Management Service (DMS) that provided both Sentinel satellite data and information products related to the U.S. East Coast from Florida through the Carolinas. The data was very helpful in enabling us to accurately track Matthew’s path of devastation and destruction and thereby best protect those citizens in the most danger. This activation occurred under the U.S.-EU “Cooperation Arrangement on Earth Observation data related to the Copernicus Program” signed in Washington, D.C. on October 16, 2015, which articulates a shared U.S.-EU vision to pursue full, free, and open data policies for government Earth observation satellites to enable civil, commercial, and scientific applications in the public and private sectors, including climate change research, weather forecasting, ocean and atmospheric monitoring, land use management, and natural disaster mitigation.

I also want to highlight how US-EU cooperation spans from satellites in space all the way down to the bottom of the sea:

The European Commission’s Joint Research Center and other EU researchers collaborate with U.S. and Canadian colleagues under the Galway Agreement of 2013 to study the Atlantic Ocean, including the mapping and characterizing unknown habitats on the seafloor, a place as foreign to us as the galaxies the Webb Telescope will image.

And even more importantly our cooperation is improving the way we live.

Perhaps the greatest scientific challenge of our time will relate to how we tackle climate change.

Just a little over a week ago, the European Union led several of its Member States to cross the finish line of 55 countries representing 55 percent of the world’s emissions that brought the historic and vital Paris Agreement into force. Getting the Paris Agreement completed and now activated was made possible in part by the U.S. and EU leadership for a high ambition coalition to address this most pressing of global challenges.

The Paris Agreement underscores the widespread recognition of the urgency of the problem and is a testament to the continued determination of states large and small, rich and poor, to tackle climate change.

Now, to ensure that the Paris Agreement achieves it goal of holding the global average temperature increase to well below 2 degrees Celsius, more work needs to be done. The U.S. and the EU already are cooperating on some of the technologies that will be necessary to achieve this goal. That includes our cooperation at our sister research centers on electric vehicles and smart girds that are housed in Ispra, Italy within the EU and at the Argonne National Laboratory outside Chicago in the U.S.

Finally, we are both committed to ensuring our citizens have easy access to government funded research

We share a commitment to open science, open data, open government, and multi-stakeholder, public involvement. That’s why we applaud Commissioner Moedas’ approach in soliciting feedback for the European Innovation Council, the Commission’s outreach to us on the EU’s space strategy, and the Commissioner’s announcement earlier this year to make all Horizon 2020 data and publications open access. We look forward to working together again as the Commission develops the Ninth Framework Program for Research and Innovation, and beyond.

So these are some examples of the excellent US-EU transatlantic cooperation already happening.

The Implementing Arrangement we have signed today is intended to enable U.S. researchers from government, academia, and the private sector, to engage with their EU-funded counterparts in an even broader array of cooperative activities than is possible today building an open platform for U.S.-EU science, technology, and innovation cooperation.

It is a true honor to be here to sign this document that will better enhance U.S.-EU cooperation on science and technology to solve global problems and shape our future world.