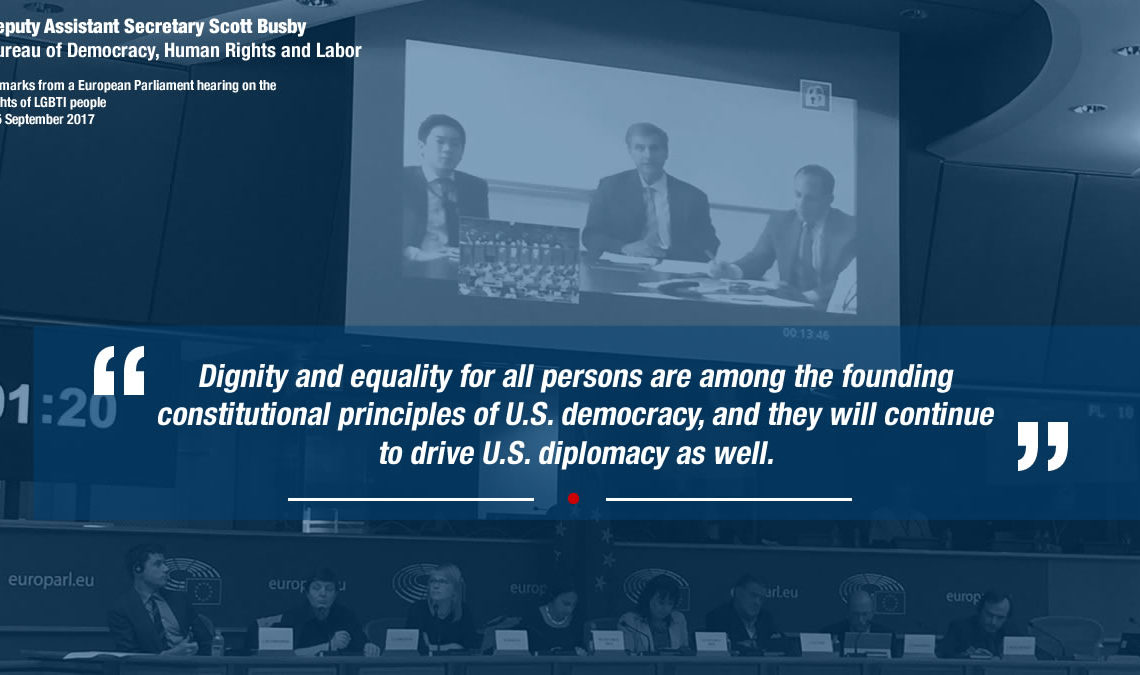 Remarks by Scott Busby, Deputy Assistant Secretary
Bureau of Democracy Human Rights and Labor
at European Parliament Public Hearing
on the Rights of LGBTI People Outside the EU and Implementation of the EU
September 25, 2017

It is real pleasure to be here today to represent the United States.  Thank you to the European Parliament and its members for organizing this session, and to my co-panelists, including activists from Russia and Tunisia.  Thank you in particular to Mr. Panzeri for his leadership on these issues.  The European Parliament is an important friend of the United States and I’m glad to be able to share with you information about our activities to promote and protect the human rights of LGBTI persons.

First, the Department of State remains committed to protecting and promoting the human rights and fundamental freedoms of all persons around the world, and this of course includes members of the LGBTI community.  We recognize that societies are more stable, prosperous and secure when all people within them live freely without fear of violence or discrimination.  In this regard, it is especially important that we pay attention to the rights of historically vulnerable groups such as religious, racial and ethnic minorities, persons with disabilities, survivors of gender-based violence and LGBTI persons.

In June of this year, U.S. Secretary of State Rex Tillerson issued a statement recognizing LGBTI Pride Month.  The Statement underscored that violence and discrimination against any vulnerable group undermines our collective security as well as our values.  Also in June, the Department issued formal guidance to our diplomatic missions around the world affirming that Pride Month could be recognized, depending of course on the local context.  I personally have been heartened to see our Embassies – including in hostile environments – take steps to promote the human rights of LGBTI persons.  U.S. diplomats meet with LGBTI activists, march in Pride Parades, fly the Pride Flag, sponsor training workshops, and use their convening power to bring different allies together in support of human rights and fundamental freedoms.  In undertaking this work, we of course recognize that every context is unique – and that our role is to support local activists and human rights defenders as they develop their own strategies and tactics to achieve their own priorities.  We strive to do no harm and as a result we do not always publicize our engagement.

Some examples of this work include the engagement of our Embassy in Ukraine, who together with like-minded diplomatic missions signed a statement affirming support for LGBTI rights and successfully urged the Ukrainian government to ensure the safety of a peaceful pride celebration.  The Embassy in Kyiv also hosted an LGBTI Art Exhibit.  In Brazil, our Embassy once again supported the LGBTI International Film Festival in Brasilia, now in its second year.  The Embassy’s Public Affairs Section also conducted training for transgender activists on the use of traditional and social media.  In Ghana, our Embassy held a reception for Pride bringing together representatives of the government, civil society and diplomatic partners.  Over 60 individuals attended. These are just a few examples and there are many more in all regions.

On my second point, the United States remains deeply concerned about the safety and security of LGBTI persons and their advocates, including in crisis zones. No one should be targeted just because of who they are or whom they love.  We continue to follow the human rights situation in Chechnya very closely, including the allegations of widespread extrajudicial detentions and torture, and in some cases killings of LGBTI persons.  In July, Secretary Tillerson sent a letter to Russian Foreign Minister Lavrov, noting the opening of a criminal investigation by the Russian government and an inquiry by the Human Rights Ombudsman, and encouraging swift and independent investigations into these troubling allegations.  The Secretary urged that any perpetrators of violations be held accountable under Russian law.  The letter from Secretary Tillerson followed multiple U.S. statements condemning the violence in Chechnya, including from U.S. Ambassador to the UN Nikki Haley, the U.S. representative to the OSCE, and the State Department Spokesperson in Washington.  We were also proud to sign on to a joint statement of the Equal Rights Coalition – the first such statement from this new, like-minded group of governments committed to equality and dignity for all – and that statement called for a stop to the violence in Chechnya and an immediate investigation.

Our concern about violence targeting LGBTI persons of course extends beyond Russia.  Addressing violence and discrimination targeting the LGBTI community is global challenge, which includes of course the United States.  We remain particularly concerned about violence targeting transgender persons, including in Turkey, where transgender refugees from Syria have been particularly targeted.  We also remain deeply saddened to learn of transgender persons who have been killed in Pakistan and elsewhere this year.

To strengthen the rule of law for LGBTI persons and members of other vulnerable groups, the U.S. government supports the training of law enforcement officers and other criminal justice practitioners on countering bias-motivated violence, sometimes referred to as hate crimes.  In some cases these trainings are led by active serving police officers from U.S. police departments who have developed considerable expertise in responding to and preventing hate crimes.  Working with the Council of Europe and other institutions, we are also supporting the American Bar Association to develop a new framework to assist governments and civil society groups to reduce violence.   In partnership with other governments, foundations, and corporations through the Global Equality Fund, we are supporting civil society’s efforts to reduce violence and increase protection for vulnerable groups.   And finally we are pleased to see continued UN attention to addressing violence and discrimination targeting the LGBTI community, including the important work of Vitit Muntarbhorn, the first UN Independent Expert on sexual orientation and gender identity.  We were disappointed to learn recently Mr. Muntarbhorn needs to step down from that position, but we will be working hard with the supporters of this mandate to identify other qualified candidates for the job.

In addressing all of these issues, the European Union plays a fundamental role. The U.S. strongly supports the EU Guidelines to Promote and Protect the Human Rights of LGBTI Persons and their full dissemination and implementation.  The Guidelines are similar to internal State Department guidance that provides examples of steps U.S. diplomats at embassies can take to support the human rights of LGBTI persons.  The Guidelines rightly emphasize the importance of working with civil society organizations – and note they should be consulted before taking public action or issuing public statements.  This mirrors our approach.  Do no harm is the most important principle of our work.

In closing, I want to emphasize that while I’ve highlighted some incidents of violence and discrimination against LGBTI persons, there are many rays of hope and positive steps in the advancement of LGBTI rights.  For example, Belize decriminalized consensual same-sex conduct in 2016 and India’s Supreme Court ruled in April of this year that the right to privacy is fundamental under India’s constitution.  In June, Timor-Leste’s Prime Minister publicly supported LGBTI persons and the country’s first-ever Pride celebration in Dili, Timor-Leste’s capital.  We as the international community should be mindful of these exciting developments and encourage similar actions by other governments.

Dignity and equality for all persons are among the founding constitutional principles of U.S. democracy, and they will continue to drive U.S. diplomacy as well.  Thank you.