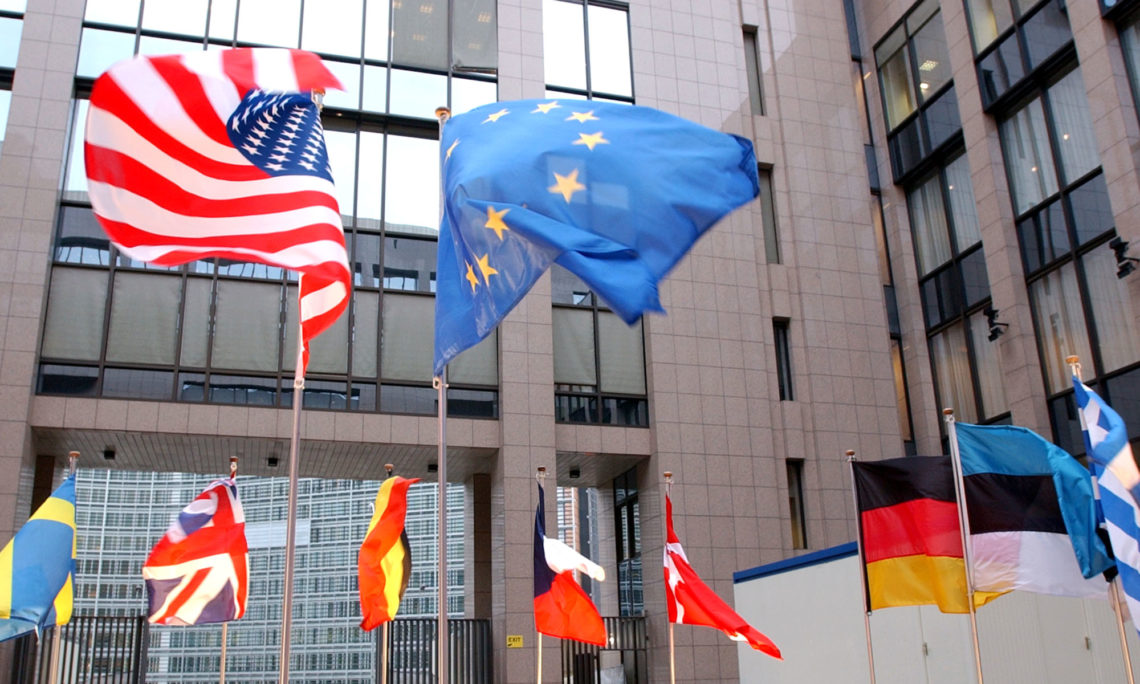 The U.S. and EU flags, top left and right, fly in separate directions at the European Council building in Brussels, Tuesday Feb. 22, 2005. U.S. President George W. Bush on is pressing his agenda for a refurbished trans-Atlantic alliance at back-to-back summits with NATO and the European Union. (AP P

Thank you, Nicolle for that kind introduction. I also would like to thank Dr. Robin Niblett, Director of Chatham House, for organizing this event, and for the invitation to speak here this afternoon.

There is a great deal of public anxiety and anger, evident in the growing populism and demagogy on both sides of the Atlantic. Much of this anxiety is due to economic factors. In Europe the lingering effects of the financial crisis and stagnant growth have been exacerbated by security concerns linked to terrorism, cultural and ethnic concerns linked to the migrant crisis, and most recently by the Brexit vote that risks weakening the EU’s internal cohesion and global effectiveness.

The massive shifts of the last few decades in particular have brought both considerable opportunities and challenges. Globalization, technology and the rise of emerging economies have reshaped the global trade landscape. They have lifted hundreds of millions out of poverty, enhanced productivity and connected us in ways few would have imagined possible. But they have also had an impact on the composition of our economies, the type of jobs and the qualifications for them, and income inequality.

The question is not simply how do we adapt to these changes, but how do we shape them? Together with sound economic policies, such as investment in infrastructure, education and training, trade agreements can be part of the solution to the problems I’ve alluded to.

The recent history of both the United States and the EU show that free trade agreements have fact stimulated exports, created high-paying jobs, and brought benefits to consumers. Businesses that export also grow faster, hire more, and are more resilient during economic downturns.

Almost 17 million jobs were added to the U.S. economy in the seven years following enactment of NAFTA; the United States added factory jobs on a net basis after a long period of decline. And, even more important, recent studies of the 17 FTAs the US has signed since NAFTA show that: our trade balance in goods improved in 14 of the 17; post FTAs, our balance of trade totaled an $85.5 billion surplus, compared to a $3.7 billion deficit pre FTA. On the EU side, in the three years since the EU signed its free trade agreement with Korea, EU exports to South Korea have increased by 25%.

The U.S. and the EU have been convinced of the benefits of free trade; that is why they have worked closely to liberalize trade, both multilaterally at the WTO and plurilaterally. We have worked closely on the recent breakthrough to significantly expand the coverage of the Information Technology Agreement that eliminates tariffs on $1 trillion worth of trade in high-tech products among 54 economies. We are also spearheading negotiations on the Environmental Goods Agreement to eliminate tariffs on solar panels, wind turbines, water treatment equipment and other environmental goods. And we are also leading the way on the Trade in Services Agreement that aims to open up markets and improve rules in areas such as licensing, financial services, telecoms, e-commerce, maritime transport, and professionals moving abroad temporarily to provide services.

Despite the evidence of its benefits, free trade is under attack. When I was in Germany recently an article in Die Welt am Sonntag caught my eye: it said that three years ago 88% of Germans believed in free trade, whereas today less than half do. This is in Germany, Europe’s export power house that has grown rich thanks to free trade.

Some people believe that FTAs are an active choice to expose our economies to greater globalization. But globalization is a fact of life; it cannot be escaped. Free trade agreements are tools to shape globalization, rather than to be shaped by it.

As President Obama said in Hannover recently, the anxieties about automation, jobs being shipped overseas and growing inequality are real and have to be addressed, perhaps by more effective trade adjustment mechanisms that assist those displaced by freer global trade. It is understandable that people feel bruised by the financial crisis and insecure about their futures; the middle class feels that it hasn’t gotten its fair share of free trade’s benefits. But the answer is not to pull up the drawbridges and stop trade.

The answer is to learn from the past and do trade the right way, with high standards for workers, consumers and the environment. That’s precisely what we did in the Transpacific Agreement that covers 40 per cent of global GDP (and much more if China were to join).

In TPP we were able to forge consensus with a number of diverse economies around complex issues to produce the highest-standard trade agreement the world has ever seen. If you read the TPP text, which is available to everyone online, every chapter reflects our ambition and readiness to lead on trade.

The agreement includes the strongest commitments on labor and the environment of any trade agreement in history, and makes those obligations fully enforceable through the same type of dispute settlement as other obligations. In fact, TPP will result in the largest expansion of fully-enforceable labor rights in history, bringing hundreds of millions of additional people under International Labor Organization standards. TPP also requires all members to combat wildlife trafficking, illegal logging, and illegal fishing, as well as prohibit some of the most harmful fishery subsidies and promote sustainable fisheries management practices.

As the world’s two largest trading partners and as two of the most advanced, well-regulated markets in the world, the U.S. and the EU naturally have high ambitions for TTIP.

All the serious studies done on TTIP conclude that it would produce significant economic benefits. One of the recent ones, authored by the World Trade Institute, concluded that if we are successful in eliminating all tariffs in transatlantic trade and reducing by 25 percent regulatory divergences and behind the border non-tariff measures, then the agreement would result in permanent increase in GDP levels for 27 out of the 28 EU Member States, as well significant permanent increases in exports and wages.

Our ambition in TTIP is even higher than in TPP with regard to regulation. Our sectoral discussions on regulatory convergence in such sectors as automotive, chemicals and pharmaceuticals are technical and difficult, but they are making progress. We are also discussing alignment around future regulations. We believe that we can achieve this if we better align our regulatory processes so as to avoid unnecessary divergences by improving transparency, participation and accountability in the regulatory and standards-setting process. This would have a particularly beneficial effect for SMEs.

I’ve had the pleasure of speaking about TTIP 80 times in about 18 of the EU Member States, and I’ve learned to my surprise that the economic arguments about jobs and growth often don’t get much traction – despite the fact that many parts of Europe desperately need jobs and growth. As a result, I spend just as much time talking about the P (Partnership) as I do about the second T in TTIP (Trade) and the I (Investment).

One of the themes of this partnership is not just what we can do to strengthen the ties across the Atlantic, but what the two of us can do together to raise standards and to help define rules of the road for the global economy of the 21st century.

One of our biggest challenges is that we are confronted with the rise and growing popularity of alternate models for economic growth and trade, which run counter to the rules-based global trading system that we have worked so hard to build since the end of World War II.

TTIP gives the United States and the European Union an unique opportunity to support the global trading system and write the rules for trade in a way that reflects important values that we share – like rule of law, transparency and high standards for protecting the environment, workers and consumers.

Through T-TIP we have an opportunity to ensure that we remain competitive in an increasingly competitive world; that we be standard setters, not standard takers; that we help lead a race to the top, not find ourselves falling behind in a global race to the bottom; and that we build upon our common values – based on democracy, market competition and fairness – to strengthen the rules-based trading system.

We are evaluating the effect of Brexit on the T-TIP negotiations: after all, 20 percent of our goods exports and 50 percent of our financial services exports to the EU go to the UK. The economic and strategic rationale for T-TIP remains strong. We’ve made a lot of progress on the agreement during the last eight months, and we will continue to work intensively with the EU to conclude an ambitious, comprehensive and high standard agreement this year.

We hope that the EU-Canada agreement is signed soon as this would be an important indicator that the EU is capable of concluding FTAs despite the trend against free trade in the EU. The decision to put forward CETA as a mixed competence agreement requiring ratification by national parliaments will facilitate approval in the Council and ratification by the European Parliament. Time will tell whether national or sub-national parliaments will vote against the deal and, if so, what impact this might have.

Let me conclude by observing that the United States and the EU have been partners in shaping the international economic system. For the past seven decades we have worked to create strong rules and institutions to govern international trade, investment, and finance. These rules and institutions laid the groundwork for generations to enjoy global stability and unprecedented prosperity. The United States continues to support the World Trade Organization (WTO) and the multilateral trading system.

Like the EU, however, the United States has pursued many bilateral and regional trade agreements. These agreements proceeded mostly in tandem with multilateral trade agreements during most of the postwar period; as progress in the Doha WTO slowed down, the appeal and number of the former increased. Some commentators have expressed concern that this trend is undermining globalization.

We believe that “Theological debates about the relative merits of ‘multilateralism versus bilateralism’ must…be placed in the context of what has happened in the real world.”[1] As emerging economies have assumed greater importance in the global trading system and as non-tariff barriers have become more important than tariff barriers as obstacles to trade liberalization, it has been difficult to get consensus within the WTO. Significant external pressure is needed to invigorate the multilateral process. We believe that “A successful effort to resolve disagreements across the Atlantic could become a template for the stalled global trade talks in several difficult areas, from agriculture to cross-border rules on services, investment and regulations.”[2]

[1] “A New Era for Transatlantic Trade Leadership,” Report by the German Marshall Fund and the European Centre for International Political Economy, February 2012.

[2] Jeffrey Schott and Cathleen Cimino, “Crafting a Transatlantic Trade and Investment Partnership: What Can Be Done,” Peterson Institute for International Economics, March 2013.