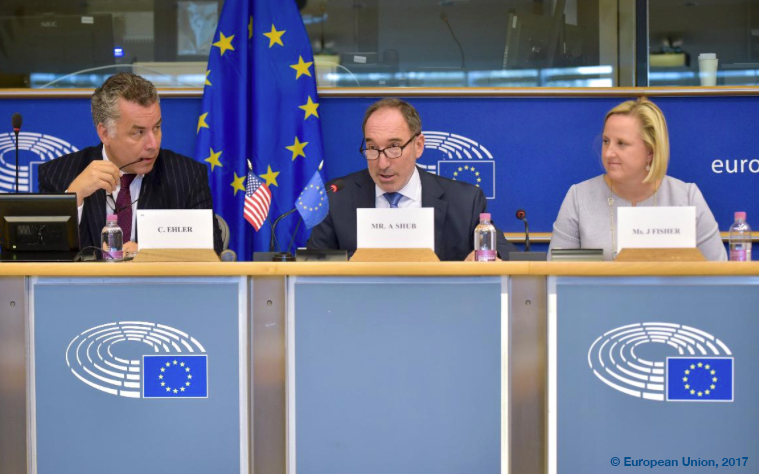 Remarks (as delivered) by Chargé d’Affaires Adam Shub
Exchange of Views on EU-US Relations and Objectives,
Delegation for Relations with the United States
at the European Parliament
Brussels, Belgium

Thank you very much Mr. Chairman. Thank you to the committee, the delegation, YIPA, and all of your colleagues. I am delighted to be here today with my colleague Julie Fischer, from the US mission to NATO. We may be in the same town, but I think it’s fair to say that in the last several decades we have never been closer in terms of our engagement on the various issues that we face in the trans-Atlantic relationship and in all the different regions across the world.  The European parliament, I think plays a crucial role in this relationship, so thank you for the invitation, and let me extend my thanks to everybody who’s done such an outstanding job leading this delegation.  I know your traveling in December, and I was with you last December, so and really congratulations for really beginning to move this commitment forward

I think the US Mission and the delegation constitute an important bridge between Brussels and Washington, especially in this last in this last most year with our election, and the beginning of a new administration, so it’s important to keep channels of communication open. This may surprise you, given all the headlines that we’ve all seen, but I’ve really rarely seen a US commitment to Europe and our European allies like I’ve seen in the last eight months, and yes there are a lot of headlines or there has been a lot of events, we’ve had a lot of elections, and a lot of comments, but I think that from the Washington side, I believe washing ton understands the importance of our partnership, the importance of our working together on so many issues.  Certainly, the high level visits that we’ve had I think confirm that. We had Vice President Pence within weeks of the inaugurations, we had President Trump in May, Secretary Tillerson many times, Secretary Mattis as well, and other visits to other member states ; Poland and Germany and so and so forth, and Dozens really dozens of senior working level visitors from across the US government.

Agencies continue to visit Brussels, to advance our work, to see us, to see NATO, to see the Parliament, to see the Commission, and the Council. And on the Washington side, it’s not just the US administration that is leader to leader that is focused on the importance of this partnership; it’s also legislatures, the parliament, and the congress.  I think we’ve had six high power congressional delegations in Brussels including; minority leader Nancy Pelosi, Senator John McCain, and many others and I know of at least two more that are heading our way so you are forewarned. The middle of October we will have a very large delegation on banking, and on terrorist finance. And so Congress’s support for Europe is important, because US policy is not just a leader to leader, great democracies, which we are— I saw outside that today is the international day of democracy—   If I had to say we have one thing in common, it’s that, and democracies are not perfect, we struggle, all of us, but great democracies listen to many voices; legislatures, former officials, think tanks, academia, industry, they all influence policy, so it’s good that we keep up these discussions. I can point to the recent sanctions package that came out of the congress which exemplifies the kind of role I think that congress can play, and also shows the checks and balances in the American foreign policy system/establishment and of an American democracy. The TLD, as I’ve expressed here before, I’m an enthusiastic supporter of. It offers this kind of close interaction between MEPs and members of the Congress; it underscores this important dimension of our relationship. For December, were looking forward to it and in the mean time we do our best to bring our visitors by, and to help you to see people in Washington.

I think that it’s fair to say, that we do share values, we do value the role of institutions in our democracies, but I think one reason the USEU partnership is closer than ever is, because of the challenges we face, and I think it is everywhere you look in the world. Whether it’s the invasion of Crimea Ukraine, Brexit, the rise in terrorism and extremism, DPRK, populism in our politics, economic and social dislocation, these are shaking our political establishments, and where better to hear those or discuss those than in the legislature. We also face the historical fact of the rise of Russia, the more assertive behavior of China and the world and then finally, I think an important factor and that’s the role that data plays. Across the spectrum of international issues and domestic issues it can be a generator of great wealth, we know that.  It can be a source of political persuasiveness, we’ve seen that for better and for worst, political military power can stem from a use of data, and it is potentially harmful and disruptive from those who seek to destabilize our societies. When I think of the spectrum were talking cyber threats, were talking disinformation, ideologies from ISIS, hate talk all these issues, whether on the military kinetic side, whether the counter terrorism on the trade side, or on the commercial side, these are all challenges that large democracies, advance industrialized democracies, with open transparent systems, need to face, and I think we need to face them together. We’re all pondering these great issues of the day, migration, terrorism, disinformation, misuse of big data, and we all know this there is confusion among the electorate our people and these are tough choices.

So, I think the answer to these challenges is to focus our energies together and deliver on our promises to our citizens, and that’s through partnership. I hope my colleague Julie will speak a little bit to some of the security and defense issues, and these are at home and abroad. But, there are many issues that we face at our level and in our committee and other committees, but I think we’re having an impact, I think it’s fair to say that if you look down at the list of the hot spots and I don’t mean the migratory hotspots, I mean the real hotspots, I think the partnership is having an effect. If you look at the western Balkans we’ve accelerated our conversations on some of those countries, progress on rule of law, I think two countries are in NATO, two are in EU accession negotiations, all of this is positive.

The Middle East continues to be a very big challenge on many many fronts, and together we are doing what we can certainly to address the humanitarian needs, but to focus our energies on constructive solutions with some of the geopolitical issues. Africa is a very interesting area that I would just like to highlight Mr. Chairman if you will permit me. The USEU partnership in Africa is sort of one of those little known secrets. We coordinate and cooperate both with EU and with member states including, I think two civilian CSDP missions. In the Sahel we do humanitarian assistance together, we do civilian and military programs together. We have high level engagement with the leadership, on counter terrorism, on economic development through the compacts that the EU has established, and also some engagement with the African Union and regional and sub-regional bodies. I believe it is quite effective, we have in Stuttgart; I believe many of you know, an Africa command and our interest coincide here. We have complementary resources were trying not to be duplicative. There are certain things that the EU does well. There are certain things that UK, France, Germany, or Italy do better and vice versa, so were cooperating on those.  We cooperate on sanctions in that area in the Congo and Burundi. All in all it’s a very promising area for the kind of work we do best together.

Sanctions I should tell we’ve had four delegations now in the last ten days. I spent the morning on sanctions with cooperating on Russia-Ukraine, DPRK, Venezuela, and South Sudan even. Some of these are critical, and we see eye to eye on many of them. The role of data, data privacy the umbrella agreement which affects law enforcement and then the privacy shield program which underpins billions in international trade, and then on the military and security side we have long encouraged European nations to step up their attention to this especially their spending on security and defense operations, and we look forward to continued discussions  development of the various defense initiatives, including; PESCO including the readiness card and the other activities potentially joint we can do with the European defence agency of course the European Defence Fund. Needless to say, you’ve heard this before, the EU’s plans will be most effective we believe for all of us if they’re complementary, and if they enhance interoperability that’s our mantra, and I don’t know, I think that is the path to progress on this.

I’ll stop here. I suspect we’ll hear many more examples of this kind of resilience and the depth of our partnership in the questions and answers. You know a senior EU military official said recently that “US-EU cooperation in the face of the challenges we face, is the strongest deterrent we have today.” So, I agree and I am looking forward to strengthening this partnership with you, and answering some questions later. Thank you.