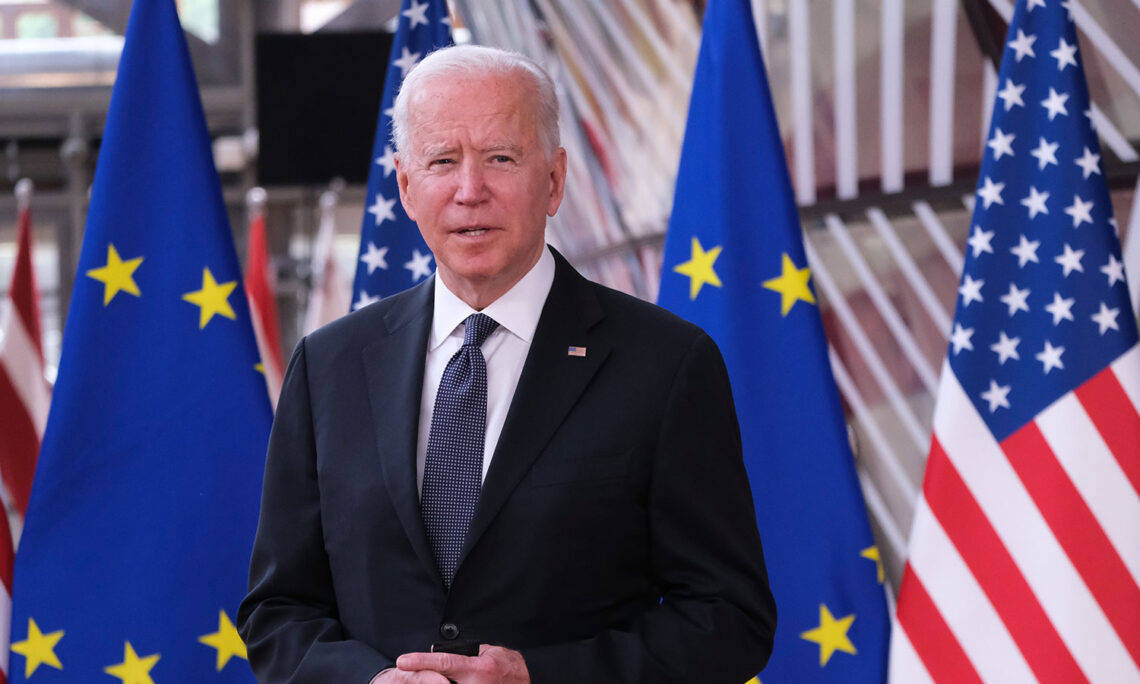 PRESIDENT BIDEN:  Well, thank you.  Thank you both very much.  It’s been one of the great pleasures getting to know you both personally and (inaudible) our official positions.  And we were at the G7, and again today — I apologize I kept my colleagues in the closed meeting.

But I brought the A-team with me today.  And, you know, I’ve said, both publicly and privately, that America is back, and this is why we’re here in full force.

I’m happy to have with me today the members of my Cabinet: Secretary of State, Anthony Blinken; he suffers from the problem of having worked with me for years.  And also Trade Representative, Ambassador Katherine Tai, who has made some real progress already.  And Secretary of Commerce, Gina Raimondo, who was a first-rate governor and one of the brightest people that we’ve worked with, and agreed to come on as our Secretary of Commerce.

And one of the things that you and I were talking about – and will come as no shock to either of you: Europe is our natural partner, and the reason is we’re committed to the same democratic norms and institutions, and are — they are increasingly under attack.

And we — I’ve said it before, and I apologize for repeating — oh, I didn’t mention Jake Sullivan (inaudible) National Security Advisor.  I’m leaving out a lot of people here.  I apologize.  I’m going to get in trouble.  But anyway, we’ll get back to that in a minute.

But we — you know, there’s a lot that is happening.  I used to always — my friends would kid me while in the United States Senate, because I served there, for always quoting Irish poets.  You think I quoted Irish poets because I’m Irish.  That’s not the reason.  I quote them because they’re the best poets in the world — that’s why.  (Laughter.)

But all kidding aside, there is a — there is a stanza from a poem from an Irish poet, who (inaudible).  He said, “All is changed, changed utterly: A terrible beauty has been born.”  I think all has changed in the last 10, 12 years, and it’s not because of any one person.

And that comes along at the same time that that also generates — when an uncertainty is generated politically like that, by individuals, it also generates some folks who are less than — how can I say it? — some of them are like charlatans, trying to take advantage of those concerns.  And we see it in Europe.  We see it in the United States.  We’ve seen it around the world.  And it’s phony populism.

So it seems to me that the best answer to deal with these changes is that — to have a circumstance where our economies grow, and they grow together, and they grow still based on the value set that united us in the first place.  And I think we do share just the same basic values of human dignity and human rights as my colleagues.

I’ll be very colloquial with you: My dad had a transition where, in the city we lived in, coal was dying; it was no longer relevant.  You know, he was not a — my great grandfather was a coal miner; he was a mining engineer.  But in northeastern Pennsylvania, when coal died — my dad was a salesperson — and the economy collapsed.  And we moved to another part where there were jobs, in southern — into — down in Delaware, a very — just across the Pennsylvania border.

And so I think we have an enormous opportunity, if we think in terms of these changes — particularly in terms of global warming — if we think of them in terms of jobs.  The kind of jobs that we’re going to have to create to preserve the environment are jobs that can pay well, that are going to be (inaudible) technologies that working-class, blue-collar workers, as we say in the States, will be able to make more money, be able to do well.  And — but we have to, all of us, accommodate those changes and provide for them.

And so, I think we have a lot to deal with, from COVID-19 to whether or not we’re in a position that we can generate the kind of strengthening in transatlantic trade and technological cooperation.

There are, sort of, a different set of priorities with the same objective: How do likeminded countries, sharing the same values, work together to improve the living standard for not only our people, but for the rest of the world?  And I think we have the capacity to do that, and it’s going to take an awful lot of hard work and determination.

And I’ll conclude by saying: One of the reasons I’m optimistic is because of our younger generation, in Europe as well as the United States.  The young generation — this one — is the best educated in American history.  It is also the least prejudiced, the most open, and the most — the most committed.

And I think that we have reason to believe that if we provide the policies that are consistent, that provide for the kind of growth and opportunity for them — and education plays a gigantic part of that — I think we — I think the future is very, very bright.  I think we have an opportunity to do some, really, very good things.

And with that, I should — as my mother would say, I should “hush up” and let this discussion move forward.