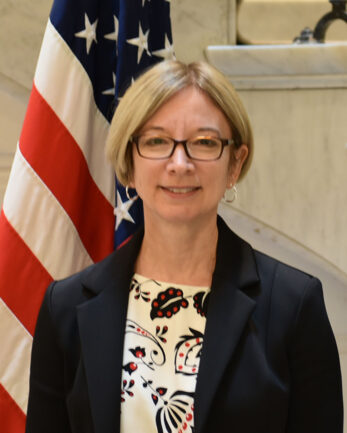 Kelly Adams-Smith is the Chargé d’Affaires at the U.S. Mission to the European Union. She arrived in Brussels on July 1, 2021.

Ms. Adams-Smith is a career diplomat in the U.S. Senior Foreign Service with the rank of Minister Counselor. Before arriving in Brussels, Ms. Adams-Smith served as Senior Coordinator for National Security Affairs in the Office of Vice President Kamala Harris. Previously she served as Chargé d’Affaires and Deputy Chief of Mission at the U.S.Embassy in Prague, Czech Republic. She has also served as Economic Counselor at the U.S. Embassy in London. From 2011-2013 she served asDeputy Executive Secretary of the White House National Security Council. Other diplomatic postings include Bulgaria, Estonia, and Russia and assignments at the Department of State headquarters in Washington, D.C.From 2019-2021 she was a faculty member of the National War College.

A New Jersey native, Ms. Adams-Smith entered the Foreign Service after earning undergraduate and graduate degrees from American University in Washington, D.C., and Harvard University and serving as a Presidential Management Fellow at the U.S. Department of Commerce. She and her husband Steve, also a Foreign Service Officer, have two children.

Tweets by the U.S. Mission to the EU