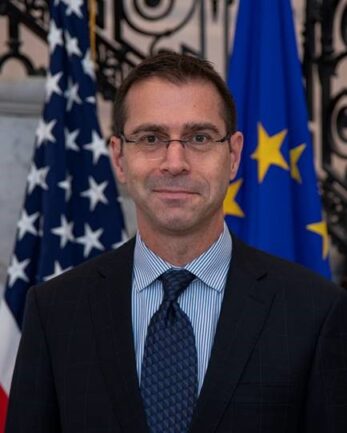 Bart Putney is the Minister Counselor for Economic Affairs at the U.S. Mission to the European Union.  Since joining the Foreign Service in 1997, he has served as Deputy Chief of Mission in (North) Macedonia, as Acting Deputy Assistant Secretary for Environment in the Bureau of Oceans and International Environmental and Scientific Affairs, and as Coordinator for Economic and Development Assistance in Islamabad, Pakistan.  He has also served in Indonesia, Trinidad and Tobago, Russia, and Armenia, and covered Poland issues in the Department.

His wife Christina and he have two sons, Kai and Soren, who have chosen to go to college on opposite sides of the United States in Vermont and Oregon.

Tweets by the U.S. Mission to the EU