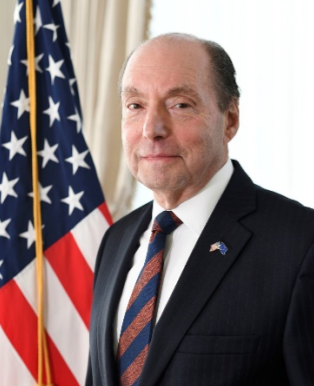 Ambassador Gidwitz has had a long and successful career in the private sector, government, philanthropy and civil society. He served as the President and CEO of Helene Curtis, a toiletry and cosmetic manufacturer and marketer, growing the company from $100 million in sales to $1.5 billion when the business was sold 17 years later. He has also served on a number of private sector boards of directors.

In his public service, Ambassador Gidwitz was a founding executive committee member of the National Committee for Employer Support for the Guard and Reserve and served in that capacity for 10 years. He also served as the Chairman of the Economic Development Commission of the City of Chicago at a time when the Midwest was under great economic stress. An advocate of education, he served as Chairman of the City Colleges of Chicago, the second largest community college district in the country, as well as two terms as the Chairman of the Illinois State Board of Education.

In the non-profit world, Ambassador Gidwitz has worked with numerous organizations ranging from social service to cultural institutions to educational establishments. He has served in virtually every position over his 44-year tenure with the Boys & Girls Clubs of America, including chairing the national organization as well as its Government Relations Committee. He has served as Chairman of the Field Museum of Natural History as well as the Chicagoland Chamber of Commerce.

Ambassador Gidwitz is married to Christina Kemper Gidwitz, and together they have two sons and a grandson.