Ambassador Schnabel came to Brussels from Los Angeles, California, where he was chairman and co-founder of Trident Capital, a venture capital firm aimed at supporting new economy companies. A longtime businessman, he started in the securities business as a financial analyst before joining the LA-based firm of Bateman, Eichler Hill Richards Inc. (now Wachovia Bank) and rising through the ranks to become its president.

He accepted his first government post in 1986, when former President Ronald Reagan named him U.S. ambassador to Finland. One of his achievements there was the negotiation of an export control agreement between the U.S. and Finland.

After leaving Helsinki in 1989, Ambassador Schnabel went to Washington, D.C., where he served at the Department of Commerce as Deputy Secretary and then as Acting Secretary of Commerce in the administration of George Bush Sr. As Deputy Secretary, he worked on the early talks on the North American Free Trade Agreement (NAFTA). He also spearheaded a Commerce Department effort to commercialize diverse technologies produced by U.S. government laboratories. 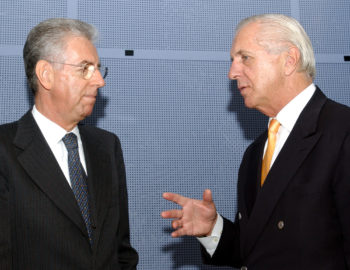 U.S. Ambassador to the European Union, Rockwell A. Schnabel, right, gestures while talking to European Union Commissioner for Competition Mario Monti, left, prior to a meeting of government restraints on competition held at the EU Charlemagne building in Brussels, Wednesday, May 14, 2003. (AP Photo/

“Rockwell Schnabel has extensive experience working with European nations as an international financier, former official at the U.S. Department of Commerce, and past diplomat,” President Bush said when announcing his nomination to the post. “He will be an excellent representative of the United States to the EU at this critical juncture in our relationship as we work together toward a new global trade round and look to expand our relationship with Europe.”

The Ambassador has long been involved in the Los Angeles community, where he served as chairman of the LA Convention Board and of the Police and Fireman’s Pension Fund ($12 billion). He and his wife founded the Schnabel Foundation to support health, education and the arts. He was also one of the founders and first chairman of the LA Travel and Tourism Education Foundation, an organization that funds scholarships for underprivileged youth to study for jobs in that industry.

Mr. Schnabel, who was a member of the Los Angeles Olympic Committee and envoy to The Netherlands for the 1984 Olympic Games, received a Medal of Honor from The Netherlands Olympic Committee and a Gold Medal from the Dutch government for work performed for those games. In 1989, the president of Finland awarded him the Grand Cross of the Order of the Lion of Finland, and he has also received the U.S. Department of Commerce Gold Medal Award, the department’s highest honor.

The Ambassador attended Trinity College and holds an Honorary Doctorate of Law from Pepperdine University.