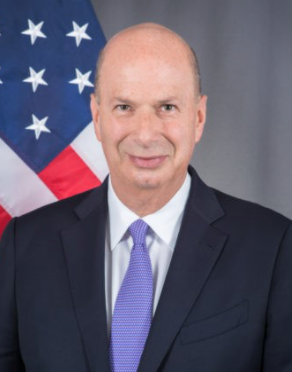 Ambassador Sondland is the founder, majority shareholder and former Chairman of Buena Vista Investments, a multi-billion dollar holding company which, together with its affiliates, employs approximately 2,000 people.  Among its holdings are Atlas Investments, a retail property business, and Provenance Hotels, a 16-hotel boutique lifestyle brand.  Buena Vista also holds a portfolio of office buildings, multi-family properties and urban development sites.

No stranger to public service, Ambassador Sondland’s prior government experience includes positions on Governor Kulongoski’s transition team, as well as service on the Commission for White House Fellowships to which he was appointed by President George W. Bush.  Ambassador Sondland also served as the Republican liaison between Governor Kulongoski’s administration and the White House, where for seven years, he assisted in securing federal funds for Oregon state needs.

As Chairman to the Governor’s Office of Film and Television starting in 2002, he helped preside over the growth of Oregon’s film and television industry, luring films such as Wild, starring Reese Witherspoon, and The Ring Two, starring Naomi Watts, to film in Oregon.

Ambassador Sondland was previously a member of the Executive Committee of the Portland Art Museum, where he and his wife, Katy Durant, endowed in perpetuity free access for children under 18 through their charitable foundation. Since 1993, their foundation has given millions of dollars to causes such as childhood education, African hunger programs, the arts, medical research, and the Military Service Initiative at the Bush Center in Dallas, Texas.

The foundation recently announced the establishment of the Sondland/Durant Early Cancer Detection Conference under the Knight Cancer Institute at OHSU and the Sondland and Durant Center for Innovation and Entrepreneurship at Duke University.

Prior to his appointment as Chief of Mission, Ambassador Sondland was a member of the U.S. Bancorp Advisory Board, and he served on the Board of Visitors of the Sanford School of Public Policy at Duke University.