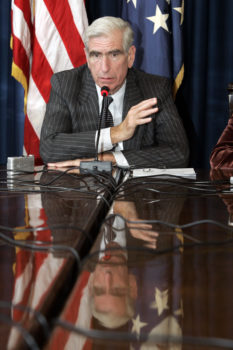 U.S. special envoy for Eurasian energy issues, C. Boyden Gray speaks during a press conference in Rome, Friday, Oct. 10, 2008. Gray told reporters that the outlines of a deal on a pipeline transiting through Turkey could be done as soon as six months. Gray did not specify the pipeline, but appeared

At the law firm of Wilmer, Cutler, Pickering, Hale and Dorr, his practice focused on a range of regulatory matters, with emphasis on environment, energy, antitrust, public health, and information technology. Mr. Gray served as counsel to the Presidential Task Force on Regulatory Relief during the Reagan Administration. While working as White House Counsel, he was one of the principal architects of the 1991 Clean Air Act Amendments. He served as chairman of the Administrative Law and Regulatory Practice of the American Bar Association 2000-2002.

Mr. Gray has served on the boards of numerous charitable, educational, and professional organizations. For Harvard University, he has been a member of the Committee to Visit the College and of the Committee on University Development. He is the recipient of the Presidential Citizens Medal and the Distinguished Alumnus Award of the University of North Carolina Law School.