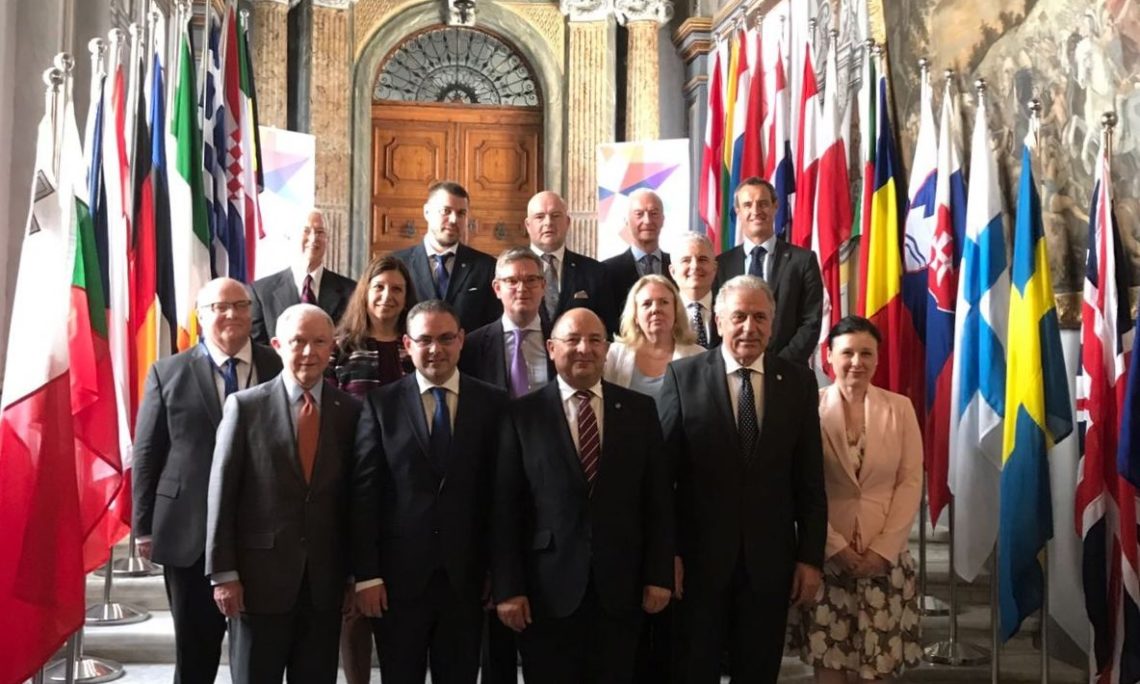 Photo courtesy of the European Commisison

The European Union, hosting the meeting in Valletta, was represented by the Commissioner for Migration, Home Affairs and Citizenship Dimitris Avramopoulos, the Commissioner for Justice, Consumers and Gender Equality Věra Jourová, the Union Security Commissioner, Julian King, by the EU Counter-Terrorism Coordinator Gilles de Kerchove and by Malta’s Minister of Home Affairs and National Security, Michael Farrugia and Minister for Justice, Culture and Local Government, Owen Bonnici, on behalf of the Presidency of the Council of the European Union.

The United States of America was represented by U.S. Attorney General Jeff Sessions and by Deputy Secretary of the Department of Homeland Security Elaine C. Duke.

The European Union and United States of America underlined the critical importance of their cooperation in the area of Justice and Home Affairs and the need to sustain and deepen cooperation while facing shared security challenges, for the benefit of the security of citizens on both sides of the Atlantic.

The European Union and the United States of America discussed their common efforts to fight terrorism. The discussion focused specifically on working together to address the issue of foreign terrorist fighters through improved information sharing, and addressing the challenge of radicalization, particularly on the internet, as well as the role of anti-money laundering legislation in tackling terrorist financing. The two sides also exchanged views and took stock of recent European Union actions in the areas of migration, border management and its role in ensuring internal security.

The discussion further covered the implementation of the U.S.-EU Mutual Legal Assistance Treaty and the question of access by law enforcement authorities to electronic evidence.

Both sides welcomed the entry into force of the EU-U.S. Data Protection “Umbrella” Agreement and reiterated their commitment to ensure its full implementation.

The European Union and the United States of America agreed on the importance of advancing towards reciprocal visa free travel under their respective legal frameworks. Both sides endorsed a cooperative approach to assisting Bulgaria, Croatia, Cyprus, Poland and Romania in advancing more rapidly towards the fulfillment of the requirements for designation in the U.S. Visa Waiver Program, consistent with U.S. law.

The sides reaffirmed the need to step up joint work on cybersecurity and cybercrime in all its dimensions including with the private sector. They also agreed to continue the good cooperation on fighting illicit drugs and to consider joint efforts on fighting smuggling and trafficking of migrants.

Reiterating the progress made and the need to face global challenges together, the European Union and the United States of America remain committed to reinforce their partnership and meet again in the second half of 2017 in Washington.