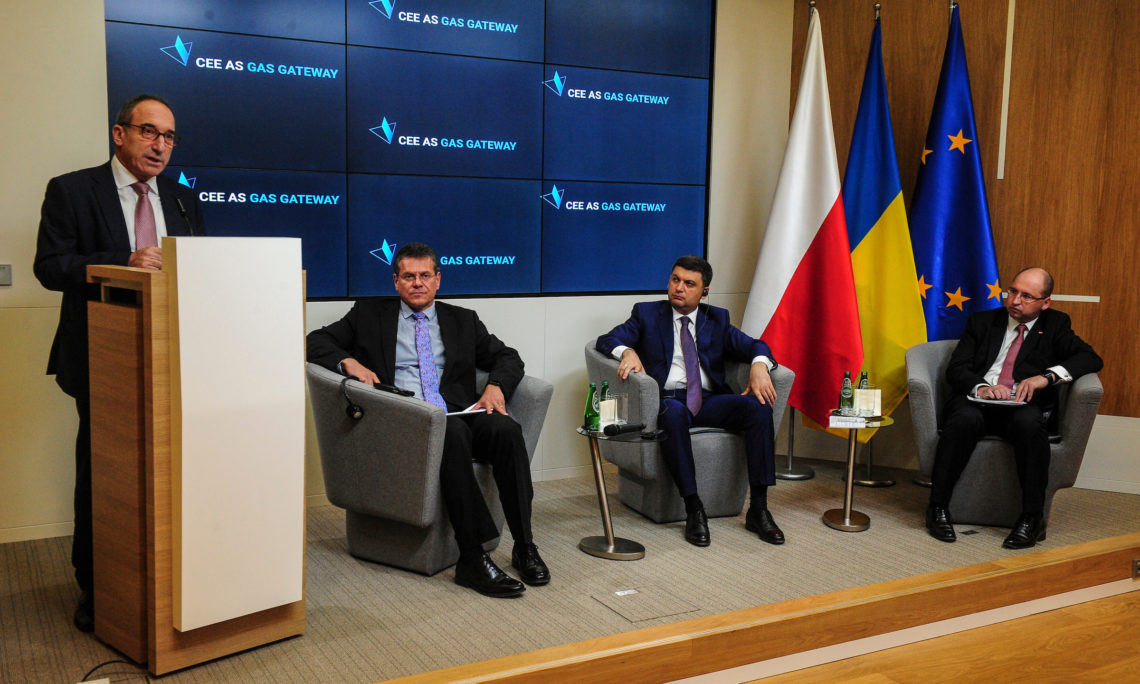 Thank you for the opportunity to address you today.

I would like to thank the governments of Poland and Ukraine, as well as the European Commission, for organizing this important and timely discussion on Central and Eastern European future energy supply routes and sources.

Let’s be frank, Europe’s reliance on Russian gas is a vulnerability. While Russia can and should remain a supplier of gas to Europe, it should not be allowed to leverage market dominance to achieve political goals.

Poland and Ukraine know this well, but I worry that others may have forgotten that when it comes to Russia, energy supply is never “just a commercial deal.”

Actions taken by Gazprom and Russia against Ukraine over the past three months provide a further reminder of Russia’s goal of hurting Ukraine.

Immediately after the February 28 announcement of the Stockholm Arbitration tribunal’s award, Gazprom refused to supply Ukraine with gas due to be delivered on March 1.

This was gas Naftogaz had prepaid for according to a Gazprom invoice and in accordance with the Stockholm Arbitration court’s award.

At the same time, Gazprom lowered pressure in its transit pipelines placing Ukraine’s gas transit infrastructure and supplies to Europe at risk.

In response to Russia’s failure to honor its commercial deals, Ukrainian citizens took the brunt of reduced gas supplies, to ensure that no one in the rest of Europe suffered.

For Russia, it’s clear that gas is not simply a commodity to be traded – it is a foreign policy tool and a weapon.

Gazprom’s disregard for the law makes it increasingly clear how serious a threat Nord Stream 2 is for Europe.

The U.S. Government welcomed Chancellor Merkel’s statements on April 10, acknowledging the political nature of the project; however, we categorically reject any notion that NS2 would be acceptable were Russia to ‘guarantee’ a minimal volume of gas transit via Ukraine.

Russia has made many assurances related to Nord Stream 2 and continued gas transit through Ukraine, but let’s remember the countless broken promises and false claims Russia has made to advance its own geopolitical objectives.

From the violation of the terms of its gas supply contract with Ukraine that I just described, to the invasion of Ukraine to the use of chemical weapons on European soil, Russia violates international norms to advance its selfish interests.

Any promise related to future Ukrainian gas transit should be seen through this lens.

The revenue and leverage Russia would derive from Nord Stream 2 would only further enable the malign behaviors we are all united in opposing.

As leaders, you all know, first-hand, the challenges faced in providing adequate and reliable supplies of energy to your citizens.

Divide Europe and strengthen Russia’s ability to use its energy resources for political coercion and malign influence;

Allow Russia to use the pipeline’s construction as an excuse to increase its already aggressive military presence in the Baltic Sea;

Undermine European energy diversification goals and stall critical infrastructure projects that the EU has deemed vital via your Projects of Common Interest list;

And hurt Ukraine’s economic and strategic stability by giving Russia the ability to end gas transit via Ukraine, eliminating a powerful disincentive for further Russian aggression and a key tool for driving needed reforms in Ukraine.

The United States takes Russia’s interference in our democratic processes and its aggression in Ukraine very seriously. The U.S. Congress overwhelmingly supported the Countering America’s Adversaries through Sanctions Act, or CAATSA, and the President signed CAATSA into law. We have also committed to continue to coordinate with our partners in the implementation of sanctions.

While we do not comment on potential future sanctions actions, we have been clear that firms working in the Russian energy export pipeline sector, are engaging in a line of business that carries sanctions risk. We continue to review potential sanctions actions and encourage governments or companies to contact us if they have questions about this process.

The United States stands in support of Ukraine, Poland, and other EU member states who view dependence on Russian gas as a national security threat, and we urge all EU member states to join the chorus of nations on both sides of the Atlantic to opposed NS2 and support the future of Ukraine gas transit.

Thank you for giving me an opportunity to speak today.