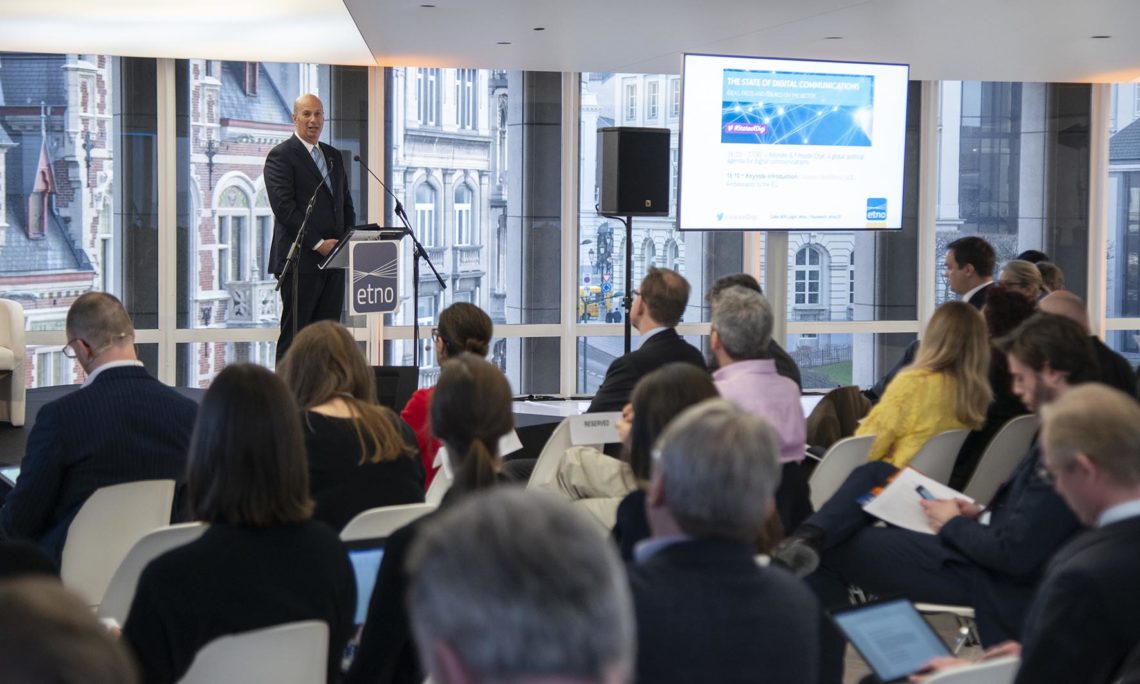 Thank you Phillip for that introduction and to Lise Furh—ETNO’s President and Director General—for inviting me to offer remarks today. And of course thank you to Lise’s great team, Alessandro and Paolo.

I also want to express my deep appreciation to those of you I have met already for your warm welcome to Brussels—these first seven months have flown by. I am starting to feel at home, in no small part due to the hospitality I have received so far. Too those I haven’t yet met, I look forward to building a very fruitful relationship with you and your organizations.

When President Trump was gracious enough to honor me with this appointment, I readily accepted. It’s a job I wanted, because of the strong policy components and because I truly value the transatlantic relationship and its transformative powers.

The Transatlantic Relationship is among the deepest, most important relationship the United States has, based on our longstanding cultural and historical ties, the world’s largest bilateral trade and investment volume, strong security and defense cooperation, and a (generally) likeminded approach to foreign policy.

Most importantly, we share unshakable values and a commitment to free and open societies and markets.

While the United States and Europe have had our share of disagreements, these frank conversations are a sign of a mature, interdependent relationship. I am here to assure you: what unites us is far stronger than what divides us.

Recalibrating our trade relationship to make it more free and fair is the United States’ number one bilateral goal.

Both sides have been clear we will work together to ensure we do not unnecessarily diverge on standards and regulations related to emerging technology—including those involving cybersecurity.

We want to prevent the development of non-tariff barriers that hobble the industries that will define growth in the future, including artificial intelligence, cybersecurity, and Internet of Things (IoT), among others.

Today, however, EU standards and technical regulations impact 92% of the value of goods exported here from the United States. I have discussed with Commission officials the EU needs to eliminate market barriers in the form of standards and regulations that disadvantage American producers. This will not only level the playing field, but also encourage innovation in Europe.

Global digital innovation matters to the United States. We must ensure proposed legislation in areas such as digital taxation and e-privacy does not damage the growing digital trade relationship enjoyed by our citizens.

Policymakers need to update rules and regulations to facilitate continued innovation in our rapidly digitizing economy. However, at a recent Commission conference, discussion focused on what new regulations are needed to “contain” digital innovations in the economy—a presumption that regulation is always necessary.

Premature or excessive regulation of new sectors such as artificial intelligence, and an inability to hit the right balance between protecting data and enabling innovation, would leave Europe technologically behind.

As you all know, the attitude in many parts of Brussels is pro-regulation. This philosophy has real consequences for EU businesses, investors, and consumers.

Rather than wait for bureaucrats to tell you what is or is not allowed, I would encourage you to tell them what you need to succeed.

You must raise your voices proactively and frequently. At the first hint or rumor of a new, innovation-thwarting regulation, you must call out the EU. You must connect with the United States and other like-minded entities, so we can work together to positively influence the outcome.

Once we move beyond serious but solvable irritants in our trade relationship, we can increase our focus on the most serious challenge for both of our economies: China.

China is obviously one of our top concerns about cybersecurity. China is working to establish itself as a cyber-power through legal frameworks and control over data and networks.

China’s laws also give us cause for concern. They require its state-owned and private companies to cooperate with and share data with Chinese intelligence and security. These obligations could even extend extraterritorially.

China’s unchecked influence over its domestic companies will increase its reach as those companies expand their operations globally.

If China is able to do this now, imagine what it could do if builds out the global 5G infrastructure.

Speaking of 5G, increased connectivity of course brings increased vulnerability. Given how interconnected we are and how much we depend upon each other, vulnerability of our allies’ networks becomes a security threat to the United States.

Leading the development of AI, big data and autonomous vehicles, among other areas, will be vital to our collective security and economic prosperity.
EU policy makers are becoming aware of the challenges and opportunities posed by the digitization of the economy. European companies’ share of global telecoms sector profit is falling, but a turnaround is possible.

As ETNO has said, Europe needs to lead in strategic areas including Internet of Things technology and the development of pervasive high-speed networks using 5G.

The United States has made the security of networks and services a priority, and this has implications for 5G. 5G deployment is an attractive target for foreign adversaries and malicious cyber actors.

The United States is active on this issue to address very real security concerns, not to advance our economic interests. The firms who would benefit most from greater focus on 5G security would be industry leaders in telecom networking equipment from Europe, such as Ericsson and Nokia.

We are at a key point in the transition from 4G to 5G networks. The infrastructure that we put in place now will be used for decades to come.

If the technology used to build 5G networks contains cybersecurity and privacy vulnerabilities they will weaken our collective security.

I can’t overemphasize this point. This is not a decision about price or quality. This is a decision about whether or not to allow a malign actor to take control of your national telecommunications system at a time and for reasons of their choosing. Would you ever put a price on national security?
Because let me be clear—that is exactly what this comes down to. China uses seemingly attractive pricing to get a foot in the door. And then, to quote Hotel California, they might check out, but they will never leave.

That is not a risk any reasonable buyer should be willing to take.

Instead, if price truly is a concern, cut a better deal with the good guys. You have options, so make them earn your business. Just don’t take the poison pill!

While, the United States is committed to an open investment environment. We cannot ignore real cybersecurity threats.

Recognizing the threats, the United States is reaching out to its allies to collaborate on best practices.

We have taken steps to strengthen our foreign investment reviews for strategic risks, bar federal agencies from procuring certain components and services from high-risk suppliers, and recommended certain mobile carriers not receive licenses because of the potential they could share date with the Chinese government.

The EU needs to take concrete actions to strengthen cybersecurity as well. An EU FDI screening framework is a positive step, but the EU must take others as well to address threats from external malign actors.

Turning more directly toward the future, I am an AI optimist. The economic consequences of this groundbreaking technology will be enormous.

But AI is a global race. As in the past, the United States and the EU must collaborate to create the standards and ethical groundwork on which AI can flourish appropriately.

U.S.-EU collaboration combined with smart regulation will give us a competitive advantage. Conversely, premature or overly restrictive regulation of nascent technologies will kill innovation…and clear the field for China to set AI standards.

While the EU says it want collaboration on AI—citing historic U.S.-EU space science collaboration as a model—proposed EU funding mechanisms would restrict eligibility to EU-owned and financed organizations, punishing businesses with U.S. partners or collaborators.

I understand ETNO launched an Artificial Intelligence Task Force. This will complement and enrich the work of the EU High-Level Working Group on AI and their published Guideline on Ethical AI. Let’s continue the public-private dialogue on this important topic.

The United States and the EU are clearly at our best when we cooperate. As we work together on emerging technologies, we must jointly promote:

We must also work towards interoperable solutions, as well as preventing conflicting laws and fragmentation of the internet. We must also avoid a patchwork of uncoordinated national laws that slow innovation and growth of emerging tech.

Let’s get beyond simplistic formulations —privacy and security are not mutually exclusive. We can have free flows of data with strong privacy and cybersecurity.

Maintaining public trust in digital goods and services is vital to the success of the digital economy.  Constant technological disruption—AI, Internet of Things, blockchain technology—requires re-thinking best practices to advance consumer trust. Otherwise, the enormous economic value of new technologies is lost if no one feels safe going online.

Europe faces a choice regarding its digital future; the rest of the world is not waiting for Europe. ETNO’s own excellent report bravely states the facts on the ground: “If [EU] institutions do not keep up with digitization, the benefits will not be reaped – at least not in Europe.”

So, as ETNO has said before, this is an inflection point for Europeans. I see three options. European technology can rise, fall or remain at the status quo, trapped by regulations that stifles creativity and leads to irrelevance.

So how can ETNO push for Europe to rise? Here are my four recommendations:

First, prioritize innovation. Innovation is the pathway to global competitiveness. The future is brightest for innovative organizations.

Second, stop asking regulators to punish your competitors. All the regulations in the world will not make a difference if Europe fails to innovate.

Third, prepare to work with a new European Commission and new European Parliament.. Reach out to them early AND often.

Fourth, accept that if the EU refuses to budge, innovation will skip over Europe. The United States will still innovate, but less than we might have achieved together. It is in our interest to do this together. And I think this is an important message to end on – the United States and EU can still work together to address critical, common global challenges and to enable a digital future that will advance the prosperity of all our citizens.