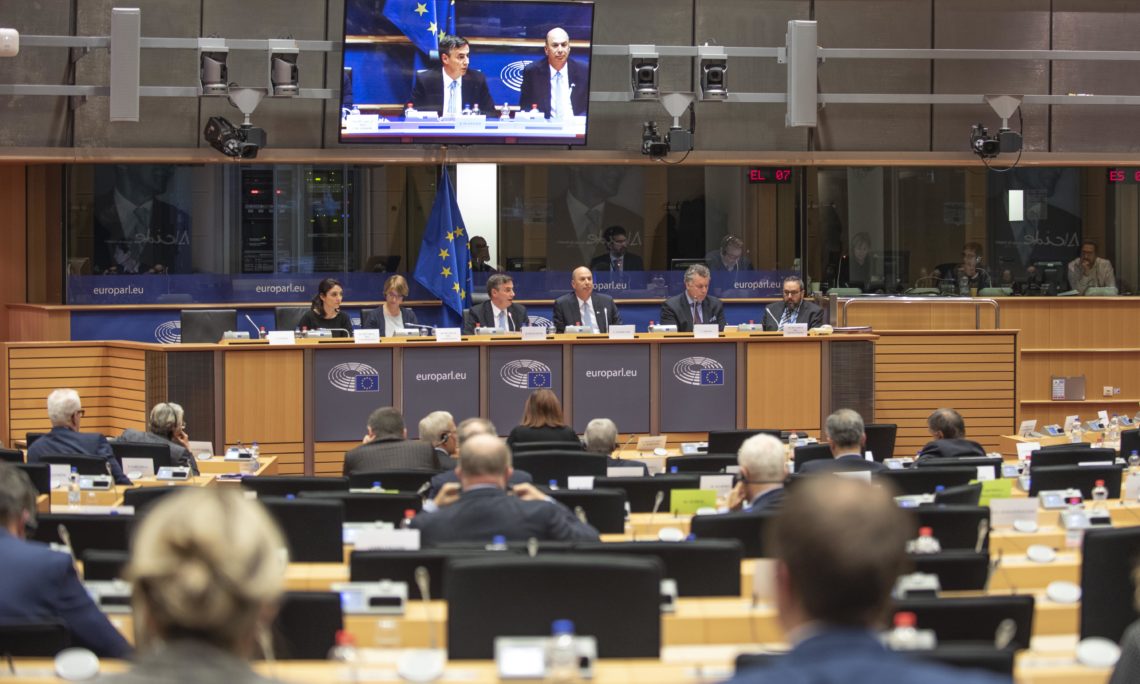 Thank you, Christian, David, for the warm welcome. I feel very much at home at Parliament because, as my good friend speaker Paul Ryan says of the United States House of Representatives, this is truly the people’s house. This is where members are closest to their constituents and where they really can see, hear and feel the will of their respective constituents and countries. So, this has always been a happy place for me. I want to thank you, those of you I had the opportunity to meet while I was in Strasbourg. While I had some very spirited debates with some of you, and some very collegial conversations with all of you, I felt very welcome and very at home, so thank you to those I met in Strasbourg and thank you for inviting me here today.

I’ve had the pleasure now of serving as the U.S. Ambassador to the European Union for about five months. It’s a job I wanted because I value the transformative powers of our transatlantic relationship.

The U.S. relationship with Europe is one of our most important partnerships. Let me say that again. It is one of our most important partnerships. It encompasses longstanding cultural and historic ties and the largest bilateral trade and investment relationship in the world. It includes strong security and defense cooperation, and a generally like-minded approach to our foreign policy challenges. It is indispensable as we seek to promote shared values, address common global challenges, and advance the prosperity of all of our citizens.

Personally, I’ve had a great affinity for Europe and its people. And that’s partly because my parents emigrated from Germany. They fled the Holocaust and eventually made it to the United States, where I am the first in our family that was born in the United States.

Now, as U.S. Ambassador, I am charged with executing President Trump’s vision of the U.S.-EU relationship. And you might have noticed the President likes action. He likes “getting things done.” Except he doesn’t always use the word “things.”

Translating the President’s vision really means that the team that I lead at the U.S. Mission to the EU will be dealmakers. We’re going to advocate aggressively. We’re going to achieve outcomes that benefit the United States. And we’re going to engage the highest leadership at the EU as the issues take shape to provide the best face-to-face, unfiltered version of what is possible.

While we will always put America first, my team and I will seek bold new ways to build and strengthen the transatlantic alliance. And here, I believe that deepening and strengthening our engagement with you, the members of the European Parliament, is paramount to this effort. You represent the direct, tangible link to the people of Europe – the constituents to whom you are accountable.

Unlike the Commission, you remain in touch with the diverse and dynamic population you represent. And I contrast this frankly with the consistent complaints I hear about the Commission from the European business community and other members of the private sector – that it is just out of touch with the reality faced by individuals, communities, and businesses across the EU.

As the Ambassador to the European Union, it is essential that my team and I seek out interlocutors who fully and faithfully represent the people of Europe – not just those seeking to build or defend a piece of bureaucratic turf. Our relationship with Europe is way too important for that.

So, as you, the European Parliamentarians, work to guide the future of the Union, the United States wants to be your partner.

Of course, the United States and Europe, we’ve had our share of disagreements and difficult discussions. I’m sure that, as in any enduring relationship, we will always have disagreements. I’d like to compare the relationship to a faithful marriage that has its ups and downs, but remains solid.

I would like to spend some time talking about a few prominent issues that I know at on the top of everyone’s mind. But before I do, let me make one thing clear. While the United States and the EU sometimes disagree about tactics, we always, always share the same goal: to improve our mutual security and prosperity.

While trade is featuring prominently in the headlines these days, I won’t spend too much time on that today, unless you want to go there during the question and answer session. The transatlantic market accounts for about one-third of global GDP and with such a massive trade relationship, there will naturally be points of friction from time to time as imbalances develop in one direction or another. So it is equally natural that the United States and the EU will have a running dialogue to resolve issues as they arise.

But as the recent European Parliament Resolution on the State of EU-U.S. relations makes abundantly clear, our relationship is much, much more than just a trade arrangement. Our partnership is based on shared values such as democracy, rule of law, open markets, human rights, and promoting peace and security around the world. Europe and the United States have a long history of standing together against aggression around the world, and we must continue to uphold that tradition.

We must, for example, defend the United States and Europe against Russia’s nefarious activities and the Kremlin’s attempts to divide us. We must continue to work together to end Russia’s war on Ukraine, and address Russia’s increasingly brazen cyber and chemical weapons attacks. We must increase our resolve as the Russians increase their threat. To do this, we must and must maintain sanctions unity, and the EU must expand and maintain its sanctions against those closest to President Putin, who are conducting these attacks. We also must closely monitor and counter malicious cyber activity and disinformation to safeguard the integrity of our democratic institutions.

Now let me touch on Iran. Fundamentally, Iran is a destabilizing force that threatens its neighbors and the West as a whole. There really is little argument about this. Iran is propping up a vile and murderous regime in Syria. It is fostering and supplying weapons (including missiles) to its proxies in Yemen and driving that country closer toward famine. Iran provides funding, training, weapons, and equipment to multiple terrorist groups including Lebanese Hezbollah, Hamas, Palestinian Islamic Jihad, and others.

The Iranian plots uncovered in Denmark and France are just recent examples of the danger posed by an unconstrained Iran. As Secretary Pompeo and Danish Foreign Minister Samuelsen discussed, this type of behavior calls for very strong collective EU action to hold Iran accountable for its continued use of terrorism on European soil.

I know many in this room were dismayed that the United States withdrew from the JCPOA, but, folks, that decision is in the rearview mirror. The JCPOA is an incomplete agreement that does not address the long-term consequences of Iran’s nuclear ambitions. It does not address Iran’s malign activities, including assassination attempts, here on this very continent, in the region and beyond. Iran is wreaking havoc in the Middle East. It is initiating terrorist acts inside European borders and it is continuing, it is continuing, its ballistic missile development as we sit here tonight.

Earlier this month, the United States resumed its full program of sanctions on Iran. And we will maintain the strongest sanctions program in history until Iran behaves in a responsible member of the global community. We consider the proposed SPVs, or the Special Purpose Vehicles, and other sanctions avoidance mechanisms to be really, really unhelpful and they will be ineffective. I have been very pleased to see the number of companies and countries that have already curtailed their business with Iran. And I and the United States applaud their actions.

As President Trump said – we are willing to talk to the Iranians – but Iran must be willing to address a wider set of concerns beyond those contained in the JCPOA. Specifically, the 12 points Secretary Pompeo announced during his speech at the Heritage Foundation earlier this year. If the regime can engage constructively, we stand ready.

Another one of my top priorities is security and defense of Europe. We already have excellent cooperation on non-proliferation, cyber security, and law enforcement. Additionally we are intensively engaged with the EU on energy security and military mobility.

The United States considers energy security in Europe one of the cornerstones of transatlantic relations. The threat of Russia using energy for political coercion cannot be overstated. Europe should not entrust its energy needs to a state intent on undermining European unity and the transatlantic relationship.

Our opposition to projects like the Nord Stream 2 pipeline is longstanding. It is based on geostrategic concerns and it is not, and I say it again, it is not based U.S. LNG sales. Nord Stream 2 threatens transatlantic security by making Europe’s eastern flank more vulnerable to Russia. We want to see Europe have multiple and a great variety of energy sources, so long as they don’t come from Russia. We stand ready to work with you to achieve genuine energy security.

A secure Europe is also one in which Allies and partners can cooperate on military mobility. NATO Allies and EU Member States must be able to quickly and freely move military equipment and personnel to respond to threats. Currently, the EU is seeking to improve military mobility through major investments in transportation infrastructure.

As the EU deliberates where and how to make investments, the United States will work closely with the EU to ensure that its efforts are consistent with NATO security priorities.

So in conclusion, and this is my message: No one can or should seriously question the United States’ commitment to the transatlantic relationship. The areas of close and likeminded cooperation are not going to change or be put on hold because we have a few disagreements in a few areas.

I firmly believe that the engagement – especially with our European counterparts – is indispensable and irreplaceable. And it is crucial that we build and strengthen our engagement with you – Members of the European Parliament, in touch with and accountable to your constituents, the members of the Foreign Affairs Committee and the Delegation for Relations with the United States.

I would also strongly encourage you and urge you to build your own personal relationships with members of our administration in Washington D.C., with members of the U.S. House and the U.S. Senate. They will welcome you to Capitol Hill and to the White House with open arms. You should interact with them on a one-on-one basis or in groups of small delegations. And to the extent I or my Mission can be helpful in facilitating these encounters, please do not hesitate to reach out.

I want to thank you for your attention and I’d be happy to take a few questions.