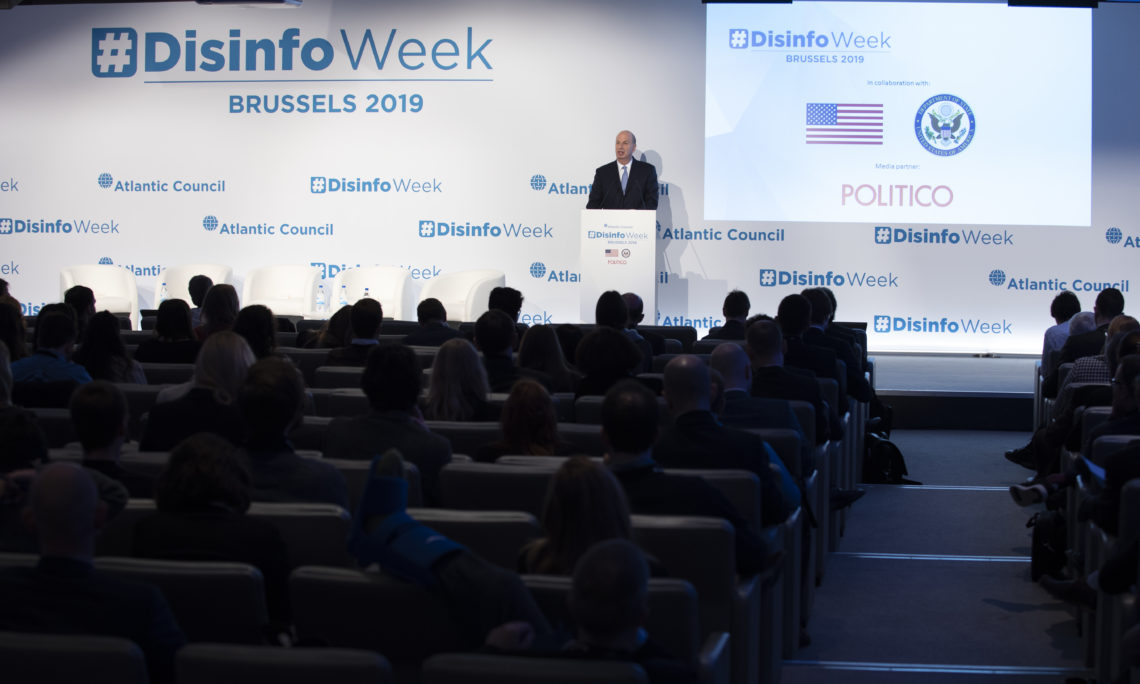 Welcome everyone. Just by being in this room tells me a lot about you, that you are concerned about this topic, that you believe it’s real, and even more importantly, that you believe something can be done about it. Because it’s going to take sustained and vigilant effort.

As I mentioned last night to the small gathering, some of this disinformation is very subtle; it’s very insidious; it’s sometimes disinformation that’s not one hundred and eighty degrees off the truth – which would be more easily identified – it might be five degrees off the truth. But those five degrees can make all the difference to someone making a decision about what to do, for whom to vote, what policies to support. And that’s why it’s very, very important as we move forward – and I had a chance to look at the agenda; it looks like a great couple of days – to really delve into some of these issues.

Geysha, thank you for your hospitality, Ambassador Fried, and I’m delighted to welcome all of you to Brussels for this Disinformation Week. If there is anything that we at the U.S. Mission to the European Union can do, please reach out and don’t hesitate to ask.

The Atlantic Council, with the support of all three U.S. Missions in Brussels and our Embassies in Greece and Spain, also brought #DisinfoWeek events to Athens and Madrid over the last few days. And, as I said, I am pleased to welcome you all here this morning.

This is an especially timely topic in light of the upcoming European Parliamentary elections, because we want to protect the integrity of those – and all – democratic elections.

But disinformation threatens more than just elections. All of us here, every day – whether we work for governments, think tanks, universities, businesses – are exposed to very sophisticated forms of disinformation. The malign actors behind the modern deluge of disinformation aim to exploit the open market of ideas in our democracies in order to sow discord, division and doubt – with a particular emphasis on doubt.

The Russian state has used malicious tactics to systematically inflame the existing divisions within our societies – so they take a small fire, and they pour gasoline on it. What we saw in the United States in the run-up to the 2016 presidential election was an interference model that Russia first practiced in Ukraine and Georgia – so that’s where they took it out for a test drive – and they’re trying to replicate it in Europe, and that should worry all western democracies.

Russian attempts to use propaganda in the United States and Europe are nothing new – they existed long before Facebook or Twitter. But they are much more pernicious today because the speed and reach of social media has such a multiplying impact.

Russia is trying to use a strength of our democracies – our openness our flow of information – to destabilize us. And the Kremlin is using the same tactics in an attempt to weaken the credibility of America’s commitment to Europe. And let me say this at this juncture – despite what you read in the paper, despite our differences on trade and on certain political issues – and those will come and go; they have for the past seventy years and they will continue to do so – our alliance with the European Union is unshakable, it’s strong, and it’s deep.

But we know their game. And we are determined not allow the Kremlin to undermine our democratic institutions. Neither will they shake America’s commitment to Europe, nor will they undermine transatlantic unity. The United States and Europe have a centuries-old partnership that can weather serious conversation on topics of disagreement – and we’ve weathered far worse than an onslaught of propaganda from Russian troll farms.

That is why the United States is actively working with Allies and partners in Europe to identify, recognize, and expose disinformation and other malign influence activities.

And of course there are more players in this game than just Russia. There are other nations with malign intent, like China and Iran. And trust me, they are hard at work. Over the next two days, this conference will also look at non-state actors, and even what it is about human nature that makes us vulnerable.

We are increasing our own efforts to promote accurate messages about the United States and our Allies and partners. We are calling out disinformation. And we continue to closely monitor and counter malicious cyber activity and disinformation to safeguard the integrity of our democratic institutions. One thing I can tell you, that we are trying to do here in Brussels, is as new initiatives are rolled out, we know that they will be subject to Russian propaganda. So one of the strategies – which you should all think about employing in your own universes – is to get out in front and hit the Russians before they hit you. In other words, when something, a new idea’s proposed, a new initiative is launched, and you know it’s something that, for example, the Russians are unlikely to support, rather than letting them start their own disinformation campaign after the fact, call them out and assume they are going to start it. And say, “After this initiative is launched, we know the first thing the Russians are going to do is, X, Y and Z. And anything you hear along those lines is fake news; it’s bullshit; it’s whatever you want to call it, it’s not true.” Get ahead of them. Don’t play whack-a-mole.

As information knows no borders, we need a collaborative approach from all sectors, including tech companies, businesses, nonprofits, and education, to develop comprehensive strategies to identify and combat disinformation.

And that’s why forums like this are so important. You bring experience and perspective to a challenge that we can all see, but have yet to conquer.

We all count on a vibrant civil society to foster healthy and robust public debates based on facts, based on evidence, and reason. We believe an engaged and well-informed citizenry is key to the strength of democratic institutions. And journalists of course, have a singularly important role to play.

We also need to promote media literacy from a very early age, so that consumers of information are trained to identify disinformation, before it goes viral.

Yes, the threat of disinformation is serious, but it is not insurmountable. So my challenge to you is this: Use these two days to be bold. Propose solutions. Commit to action. And I promise you that the United States will continue to strenuously defend against Russia’s nefarious activities and the Kremlin’s attempt to divide us and the disinformation attempts of other malign actors.

As I said, the United States and Europe share unshakable democratic values and a commitment to free and open societies. And no amount of underhanded propaganda is going to change that.