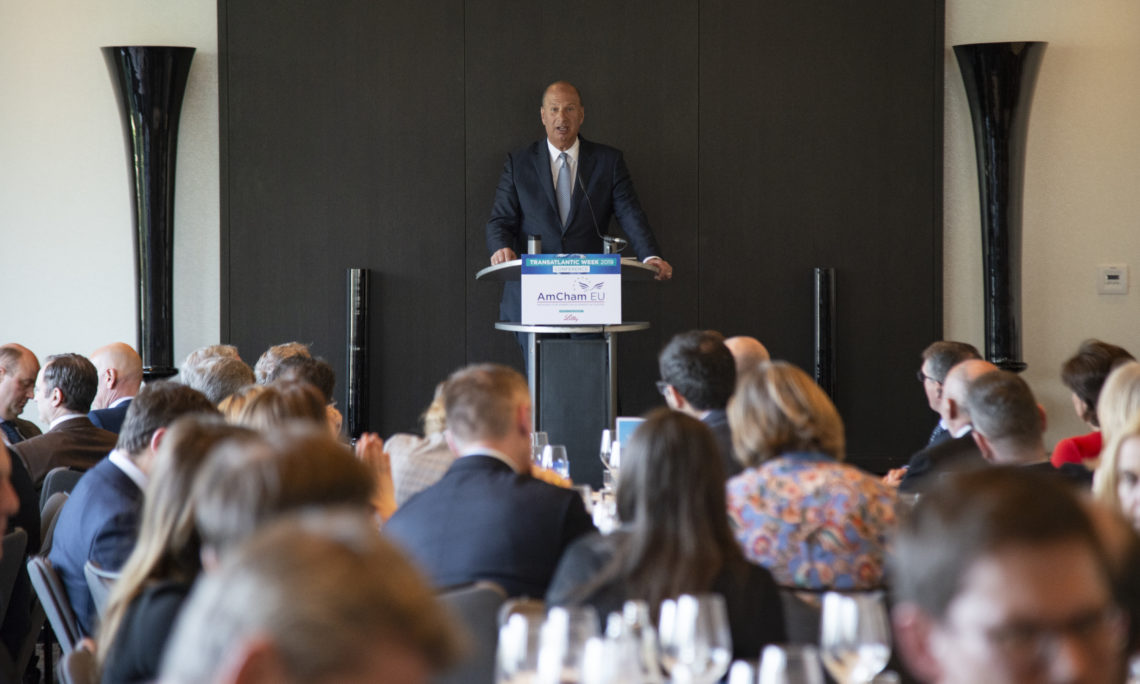 Hello, and thanks to Susan for having me here today. I’ve been in Brussels about eight months now, and it’s nice to see so many familiar faces in the audience.

At this point I think most of you know where I stand on the key issues and the challenges in the transatlantic relationship. In speeches and op-eds and during media interviews I have tried to be very frank in my assessments. Some would say too frank, but I truly believe that most people appreciate and honest exchange that moves the needle.

AmCham is an important organization, and a good partner to my Mission. I can’t overstate the role that American businesses play in shaping and growing the connections between the United States and Europe.

In fact, just next week I am taking the second iteration of a trip down the West Coast to meet with great American companies. I want to ensure they are aware of the tremendous opportunities in Europe.

More importantly, I want to hear from American business people at the helms of companies large and small. I want to know what’s working for them in terms of their European strategies and what’s not. Because my job is to make the U.S.-EU relationship stronger and fairer for the American people.

I was just in DC earlier this week, where I hosted a dinner for Ambassador Lambrinidis. His arrival coincided with the State Department recognizing that the EU deserves a protocol status equal to that of a bilateral Mission. It’s an outcome I worked hard to achieve, given the EU’s importance.

Based on the attendance at my dinner for Stavros, I don’t think there is any doubt now about that importance.

Secretaries Perry and Ross, Larry Kudlow and Sarah Sanders from the White House, the State Department’s Counselor and our new Acting Assistant Secretary for European Affairs. They don’t turn out for just anyone.

I am confident that in Stavros I have a counterpart I can work with, and we both share a vision for what the relationship can achieve for citizens on both sides of the Atlantic.

Obviously, it’s not all happiness and light. I think the media overstates some of our differences, but if everything were perfect, I wouldn’t need to be here. When I arrived, I pledged I would not try to sweep aside our differences.

That’s not useful. It’s not realistic or productive. And, most important, it’s not necessary. One of the key strengths of the U.S.-EU relationship is our ability to talk candidly and often about our differences.

In a moment, I will take some time to talk about trade and a few other parts of our relationship. But before I do, let me make one thing clear. While the United States and the EU sometimes disagree about tactics, we always, always share the same goal: to improve our mutual security and prosperity. Our differences make for exciting headlines, but what is very often overlooked is our cooperation.

U.S. and EU cooperation in areas of common interest is astounding. From counterterrorism, to preventing global drug trafficking, to calling out Russian aggression and standing unified on sanctions, we do make each other more secure.

Through our businesses and investments, and our scientific, educational and cultural exchanges, we make ourselves more prosperous.

More importantly, and this is a key point, we share unshakable values, and a commitment to free and open societies and markets. Our commitment to these values has been tested many, many times in the last half-century.

Today, we urgently need to rededicate ourselves to these values to preserve them for ourselves and for future generations to come.

Since I arrived in Brussels, I have tried to make one thing clear: the United States and the European Union work best when we work together.

Unfortunately, that simple idea is all too often lost in the noise as we go running to put out one fire after another—and these are fires of our own making.

At the same time, I have also made clear that nothing in this world is certain. If we don’t fix what are now small irritations in the relationship, before long we will risk them tearing the relationship apart.

We are good partners and this is an important relationship—too important to let drift. We need to work together to get things back on course.

At our best, the U.S. and the EU set global standards that ensure safety and health. We provide an example for fledgling democracies.

We collaborate to counter the threat of terrorists, isolate rogue regimes, and deliver developmental assistance and disaster response to those countries most at risk.

We confront China, Russia, and other world actors who fail to share our vision or values and who are actively working against all of us.

At our worst, we are distracted by challenges that are readily solvable. We waste time locked in endless discussions that produce no results, despite the fact we seek the same goal.

As an example, the EU expends far too many resources complaining about U.S. suspension or withdrawal from international agreements.

Let me tell you, we will never accept the premise that doing something differently from the EU is inherently wrong. If we are party to a bad agreement that doesn’t work, we will either fix it or leave—and our strong preference is to fix it.

We are always willing to engage other parties in this effort, but at the end of the day agreements must be effective and benefit the people of the United States.

More importantly, when the United States withdraws from an agreement, we don’t do so on a whim. When a partner the size and importance of the U.S. makes a move like that, it should give pause and then raise real questions, rather than producing an uninformed, knee-jerk reaction.

The United States and EU both recognize Iran’s behavior is deeply problematic, yet we argue about whether it’s better to be in or out of the flawed JCPOA rather than focusing on how to solve the underlying problem together.

We also spend enormous amounts of energy fixing errors and cleaning up self-inflicted wounds instead of moving things forward productively. The recent tax haven blacklist comes to mind, which was imposed by bureaucrats and then reversed thanks to the wisdom of the Member States. Some of this is institutional and won’t change.

I have all too often had to turn to Member States when the EU can’t or won’t help. But all too many of our problems are the result of simple bureaucracy and needless regulation.

Let’s look at trade, for example.

Forty trillion dollars combined GDP. A stock of $5 trillion in two-way foreign direct investments fuels annual trade of a little over $1.1 trillion in goods and services, supporting 15 million jobs on both sides of the Atlantic. Let that sink in to get a sense of how important it is to get this trade relationship right.

I arrived in Brussels last July highly optimistic. I came to government service from the business world, and I was pleased that, after years of deadlock, Presidents Trump and Juncker met in Washington on July 25, 2018.

On that day, both men pledged to make the wildly imbalanced U.S.-EU trade relationship freer, fairer, and more reciprocal. President Trump is a man of action, and it seemed as if things were happening.

We have made little progress—in fact USTR Lighthizer just told Congress our trade talks are at a complete stalemate.

I have spoken with many, many industry leaders in Europe who feel as though the EU is not taking their concerns to heart, and these are European business people, not American business people. And they urge us to reach an agreement in a reasonable amount of time to reduce market uncertainty and to forestall an escalation.

The most important elements the Trump administration brings to our trade discussions are seriousness and urgency. And, to be frank, the more the EU leadership plays the delay game, the more we will have to use leverage to realign the relationship.

But some believe they can delay and wait out this President. The problem is that that tactic really doesn’t work because a President of either party is very likely to demand a realignment.

Case in point: I recently had the opportunity to escort some of the Democratic party’s most senior leaders to their meeting with EU officials. In those meetings it was crystal clear that while the Democrats disagree with the President on many issues, when it comes to fixing our trade imbalance with the EU there is no daylight between them. None.

But our relationship is much, much more than just a trade arrangement. Let me offer you a sense of some of the other pressing issues in my wheelhouse.

Energy Security: The United States considers European energy security one of the cornerstones of the transatlantic relationship. The threat of Russia using energy for political coercion cannot be overstated. Europe should not entrust its energy needs to a state intent on undermining European unity and the transatlantic relationship. Rather, Europe must diversify routes and supplies.

Our opposition to projects like the Nord Stream 2 pipeline, which would take Russian gas to Europe, bypassing Ukraine, is longstanding. It is based on geostrategic concerns.

Let me repeat that. Our position is based on geostrategic concerns. Nord Stream 2 threatens transatlantic security by making Europe’s eastern flank more vulnerable to Russia.

The United States—and many EU Member States—firmly believe that the best solution for Europe is diversification of energy routes and supplies. As I recently wrote in the Financial Times, right now the EU has a once-in-a-generation opportunity to loosen Russia’s energy chokehold on parts of Europe.

Of course, the United States can be a major and immediate part of the solution. We are the world’s largest producer of natural gas, and are on track to be the third largest exporter of LNG, after Qatar and Australia.

Yet the argument that the U.S. opposes Russian pipelines just so that we can export more LNG to Europe is wrong. Our support for European energy security has been a hallmark of the transatlantic relationship since the end of the cold war.

Military Mobility/Defense: We will also continue to work with EU partners who are also NATO Allies to increase their spending on defense in line with President Trump’s call for Allies to fulfill their commitment to spend 2 percent of GDP. A secure Europe is also one in which Allies and partners cooperate on military mobility.

NATO Allies and EU Member States must be able to quickly and reliably move military equipment and personnel to respond to threats. As the EU also deliberates where and how to make investments as part of its new defense initiatives, I am working to ensure the United States works closely with the EU to align its efforts with NATO security priorities and to open its tenders to U.S. companies.

So in conclusion, this is my message: No one should seriously question the United States’ commitment to the transatlantic relationship.

The areas of close and likeminded cooperation are not going to change or be put on hold because we have a few disagreements in a few areas. At the same time, we will not be content to maintain the status quo in areas that so clearly disadvantage the United States.

Thank you, and I would be happy to take questions.