Ambassador of the United States of America to the European Union 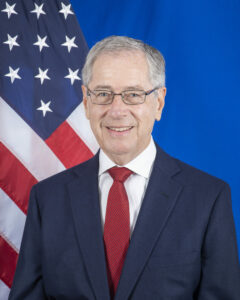 Ambassador Mark Gitenstein arrived in Brussels in January 2022 to assume his position as the United States Ambassador to the European Union.

Gitenstein is a lawyer who recently retired from Mayer Brown LLP, where he had served over the last 30 years as partner and counsel. Gitenstein served as U.S. Ambassador to Romania (2009-2012) and began his career with 17 years of service in the U.S. Senate on the Judiciary and Intelligence committees. He worked for then-Senator Biden for 13 of those 17 years.

He has spent much of the last decade working in Central and Eastern Europe, especially Romania. Since 2009 he has, either as ambassador or as counsel to NGOs and commercial clients, focused on preserving and fortifying democracy by ensuring transparency in equity markets, fighting corruption, and strengthening the rule of law.

He earned a BA from Duke University and JD from Georgetown Law School. He was awarded the Star of Romania, the nation’s highest civilian honor, by the president of Romania in 2012. In 1993, he was also awarded the American Bar Association’s Silver Gavel award for his book Matters of Principle about his role as chief counsel of the Senate Judiciary Committee during its consideration of Robert Bork to be an associate justice of the U.S. Supreme Court.