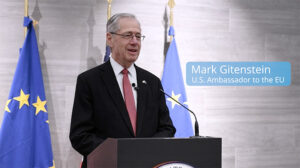 I would like to begin by acknowledging my wife Libby, my indispensable ally, partner and confidante in this job and my dear friends – Michael Adler our ambassador to the Kingdom of Belgium and his wife Judy and Julie Smith our ambassador to NATO and her husband David.

Earlier today, Her Majesty Queen Elizabeth II was laid to rest. Before I begin, I’d like to extend my deepest sympathies to the peoples of the United Kingdom and the Commonwealth. So please let us have a moment of silence in her memory.

Excellencies, Distinguished Delegates, Colleagues, Ladies and Gentlemen. Good evening and welcome. I thank you for joining us tonight.

First, with respect to her majesty: I am struck by her role as the head of state and its relevance to us today. Her role was in essence diplomatic: the premier ceremonial representative of her people. In that regard she embodied the notion of “stay calm and carry on”. With warmth and solemnity she represented the essence of the kingdom and to me she was a model diplomat. We as diplomats can all learn from her.

This is my first rentrée season in Brussels, and I’ve been struck not only by the flurry of activity, but what it represents – a time of reunions among old friends and introduction to new partners. This gathering underscores that relationships are at the center of everything we do, and tonight’s impressive turnout is a testament to the strength of the Transatlantic partnership, a strength that is now carrying us through a time of war.

Like in many of your institutions, we have some new colleagues at our Mission following a busy summer transfer season. I’d like to introduce two of them here tonight; two who along with Kelly whom you all know – embody that notion that I spoke of with respect to the Queen, warm but serious and accessible: Greg Burton is our new Minister Counselor for Economic Affairs. Jenny Harhigh is our new Minister Counselor for Political Affairs. I hope you will get a chance to meet them tonight.

We live in extraordinary times. As President von der Leyen said so eloquently in the State of the Union address last week, “Today we all see that we must fight for our democracies. Every single day. We must protect our democracies both from external threats, and from the vices that corrode them from within.”

Together, Europe and the United States have met the external threat of our time head-on. We have stood with Ukraine and said to Russia that we will not stand by while Putin wages an illegal, unprovoked war. Whether it is by the generosity of the European citizens who have opened their homes and communities to refugees and IDPs, the provision of military assistance, humanitarian aid, direct budget support, or unprecedented, effective sanctions, the United States and EU have responded to the call of our age. Billions of dollars in military assistance and humanitarian aid from the United States and EU have defended territory, saved lives, and provided hope when it was needed most.

And let me be clear – sanctions are working. Russia sells its oil at a discount. Its GDP is in freefall, anywhere between 9 & 15 percent this year. One thousand companies have exited. Hundreds of thousands of Russia’s best and brightest have fled.

Russia cannot buy high quality key inputs, particularly in energy, high tech and defense sectors. Its military is cannibalizing its own airplanes to keep them in the air. As President von der Leyen rightfully noted last week, they are taking chips from things like dishwashers and refrigerators to fix their military hardware, showing just how much their industry is in tatters.

And we have instituted unprecedented, targeted sanctions against individuals who have enabled Putin’s war against Ukraine: oligarchs, Kremlin-elites, and key defense and technology players.

We know that Ukraine will prevail. We also know the threat to democracy will not end when the last shot is fired. When my good friend, President Joe Biden, asked me to be the next U.S. Ambassador to the European Union, I accepted because I know the internal threat to our democracies requires attention. The strength of the United States and Europe lies not only in our economic might, but in the values we cherish most: values such as the rule of law, the right of human dignity, and the freedom of the press.

Last week, we gathered government, civil society, and academic leaders for a critical discussion about the pivotal role media plays in the fight against corruption. There was universal agreement that the United States and Europe – now more than ever – must support credible and independent media that hold governments – including my own – accountable. We must support and defend journalists and their honorable profession not just with moral support, but by building economic models and media ecosystems that allow them to thrive in the 21st century and beyond. In the months ahead, I look forward to continuing this discussion and translating it into concrete actions, and I will count on your support.

Through the pandemic and especially over the last six months, the United States, Europe, and our partners around the world have exhibited incredible unity and strength of purpose. As we look to the challenges ahead, I take heart that all of us in this room are in the fight together.

I am grateful for your presence. Please enjoy the evening and continue the conversation about our shared work at this extraordinary time.