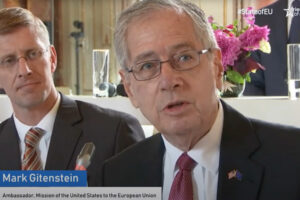 Ambassador Gitenstein:  Thank you, Jamie.  I want to thank the Friends of Europe for inviting me and having me here today to be part of this very prestigious group of speakers.

From the start Putin’s war with Ukraine has been about frustrating the Ukrainians’ deep-seated desire to live in a democracy and a free market.  The war is not about Ukraine joining NATO.  It never has really been.  It’s all the way back to Euromaidan.  It’s about Ukraine’s desire to develop ever-closer ties to the European Union, and not only did Putin intend to prevent Ukraine from closer ties to the EU, he also thought he would divide the U.S. from its allies and partners.  What I say to my friends in the EU is that the Ukrainians are fighting for our freedom and for our markets and our democracy.  That’s why it’s so important.

Let’s not forget what this is really about.  As AJ our Turkish friend last night for those of you who were at the gala, said it’s about fascism.  My President would say it’s about democracy versus autocracy.  And that’s true for the whole region we’re talking about.  From the border lands of Europe to the 27 Member States, and sadly in the U.S. as well.

We know the Kremlin playbook.  Disinformation, propaganda, intimidation, outright censorship.  This is true for the whole region, the whole gray area you’re talking, and unfortunately the United States [and Europe] as well.

My message would be that in answer to the threats to democracy or fascism, it’s critical that we do not flinch, we do not equivocate, we do not appease.

The Kremlin’s attempt to disrupt our democracy and the transatlantic partnership serves as a reminder to us all of how important it is for us to preserve in our fight to protect our shared values.

The fight for democracy is critical not just for Ukraine but for the European Union.  The U.S. Mission to the European Union, together with the Czech Presidency in the European Union, recently organized a conference on ways to support a sustainable and pluralistic media environment in Europe and beyond, in the border lands as well, in answer to your question.  We organized this workshop because I truly believe that one of our greatest allies in fighting against authoritarianism and democratic backsliding is an independent press.  A free media is crucial to helping democracy, and it’s pivotal in the fight against corruption.

We have actually some fairly good and clever specific ideas we’re working on and I’d be happy to talk about that if you want to follow up with a question, or for anybody in the audience.

Our goal must be to preserve unity in the European Union and to preserve unity between the United States and Europe, and we must energize Ukrainians on the front lines and Americans at home.  We have to create unity at home, have a great narrative that people understand.

Now more HIMARS and Javelins and tanks and air defense are critical.  And the non-conventional use of technology is all important but it’s not sufficient.

Independent, courageous journalists must be prepared to tell the world what is really happening in Bucha, in Kyiv, in Kherson.

As my President Biden would say, it’s the power of our ideas, not the idea of our power that will win this struggle.

And as AJ said last night, humans are inherently fair if a courageous leader calls upon them by telling them the truth, as AJ said last night.  And I talked to AJ — we were at the same table and I sat down with her afterwards, after she gave her speech.  I said you know, it reminded me what our greatest president said on the eve of his inauguration in March of 1861 — almost 200 years ago.  He said the purpose of this presidency, the essential message of his presidency would be to call on the better angels of our nature.

And if we can do this job, if we can preserve an independent media, if they can tell us the truth and we have leaders who have the courage to act on that truth — all over, whether it’s Ukraine or Moldova or Georgia or Hungary or Poland or anywhere here in Europe, and certainly in the United States, we will call on the better angels of their nature and we will save democracy against autocracy and the Russians will fail.

Moderator:  Thank you, Ambassador.  That was very eloquent, very very clear.  I’d like to take your bait because at Friend of Europe, being a think tank, we love ideas, particularly ones that we can run with and try to develop, and maybe help to develop with you.  It’s fantastic that you have this initiative between your mission and the Czech presidency.  So what sort of practice can you do to sort of make the media in our partner countries in eastern neighborhoods stronger and more resilient, better able to do their job?

Ambassador Gitenstein:  I don’t know if I can do it in a sentence.

Ambassador Gitenstein:  This is a problem all over the world.  It’s a problem in the United States.  We have huge what we call media deserts.  No newspapers in [like] three-quarters of areas of the states.  And in countries in the European Union, there’s no media plurality.  The media is actually owned by the bad guys, very much influenced by the Russians, for example.  How do we respond to that?

I think we have to build media platforms.  They exist actually in Moldova, they exist in Ukraine clearly, and they exist in some of these countries in the European Union.  We need to build business models, and to have a panel on how do you build business models.  And then we have to build equity investment to prove to people that these are profitable ways to make money, and then you’ll have sustainable journalists working in all of these countries.

And by the way, I believe that part of Ukrainian reconstruction should be not simply funding and saving civil society, but funding independent media.  If we don’t want that reconstruction to be, which by the way I predict will be a trillion dollars, a third of which went to the Taliban in Afghanistan, not to happen in Ukraine, we need watchdogs.  The best watchdogs in the world?  Media.  We need to build a platform where they make money doing this and they can be sustainable and not dependent on public financing.