Ambassador Gitenstein provides remarks at the fifth anniversary of the College of Europe's Master of Arts in Transatlantic Affairs (MATA). 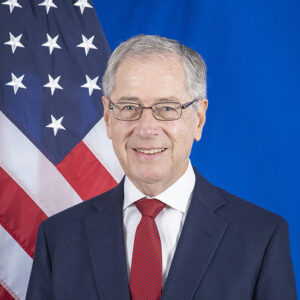 I was asked to become an ambassador first to Romania in 2009.  I’d been a lawyer up to there, and I never thought about being an ambassador until the Vice President of the United States, at the time Joe Biden, asked me to do it.  I was worried about did I have the skills to do it, et cetera.  I was not a so-called foreign policy diplomat, the architect of which was Madeleine Albright.  And I wondered how to do the job, how to talk like a diplomat.  Some people say I don’t talk like a diplomat.  I’m a little bit blunt.

But you know what I learned about Madeleine Albright and I’d always admired about her is she was sort of the essential diplomat, but she didn’t talk like a diplomat.  And I was in conversations on sort of the periphery watching her, and she was very blunt, and I like that in a diplomat.  I think it’s important.

I’ll give you two stories about her, one of which I know is true because I was with the person who told me the story, actually Madeleine Albright said this to him.  And the other is, I read about and I assume it’s true.

The first story comes from Senator Chris Dodd who some of you may know who was a very well-known member of the Senate Foreign Relations Committee, a very close friend to the current President of the United States and quite a diplomat in his own right.  I was having dinner with him, my wife Libby is in the audience, she may remember this.  It was in the middle of some Middle East crisis, I can’t remember which one, probably towards the end of the Clinton administration.  He had called her about how to deal with it, and she had sort of lost patience with him, it’s clear, which it’s unlike Chris to be so cautious.  And Madeleine Albright said to him, “Chris, when doing diplomacy in the Middle East, it’s like riding a bicycle.  Just keep on pedaling.”  Which was a very blunt and pragmatic way of looking at the Middle East and it’s obviously true.

The other story which is a well-known story, apocryphal, I would imagine, but I can also see her doing this.  This was, I think in the Clinton administration, I think Colin Powell was still Chairman of the Joint Chiefs of Staff.  She may have been at the UN at the time.  And there was a struggle over what to do about Serbia and the Balkans.  And she was in a meeting with President Clinton, Colin Powell — and Colin Powell was bragging about what his military could do and what he couldn’t do.  And she turns to him in front of the President and says, “Well, I’m very impressed with your military but when are we going to use it? When are we going to use this wonderful military”, which was a very blunt way of confronting a general and the Chairman of the Joint Chiefs.

But let me move on to what I want to talk about today beyond that.  It is a pleasure for me to join you today for the 5th year anniversary of the Master of Arts in Transatlantic Affairs program.  Given the events in the current global climate I’m not sure there has ever been a more important time to be studying Transatlantic affairs.

Nearly one year ago President Biden traveled to Brussels to meet with Presidents von der Leyen and Michel for the U.S.-EU Summit, the results of which was an ambitious road map to shape the course of the Transatlantic relationship for the years ahead.  So much has changed since that historic meeting.

One thing remains very clear, the United States and the European Union are more united than ever in our commitment to ensuring democracy and free markets and the triumph over autocracy in Europe and throughout the world.

During my time as U.S. Ambassador to Romania, I came to realize that the European Union is the most important organization in the world for bringing democracy and the rule of law to countries like Romania and the rest of Europe.  It was for this reason, when the President-Elect asked in November of 2020 what I wanted to do, that I said I wanted to be a part of that process in Brussels.  He was sort of surprised actually.

I arrived in January of this year with every intention of spending most of my mandate working on the rule of law and anticorruption.  I’ve worked over the years with then Vice President Biden on this issue and I fully embraced his notion that the struggle between democracy and autocracy would define his foreign policy and his presidency.

President Putin’s unprovoked and brutal invasion of Ukraine has made the struggle between democracy and autocracy the defining struggle of our time and given all of us a new sense of urgency.

I have visited Ukraine on four occasions in the last ten years and developed a deep respect for the country and its citizens.  Ukrainians are fighting for democracy everywhere with their existential defence of freedom and self-determination in Ukraine.

The current crucial challenge for the U.S. and the EU is supporting the Ukrainian people who are risking their lives to preserve these principles in the face of ruthless autocrats whose only answer to that challenge is to destroy schools and hospitals and kill innocent civilians.

Today we must deliver a strong, united and forceful response to Russian aggression.  This is why the Transatlantic partnership is more important than ever and why our coordination on sanctions, export controls, humanitarian assistance and arms shipments to Ukraine is so crucial.  And our efforts are succeeding.

By the objectives laid out before his February 24th full-scale invasion, the Kremlin has already failed.  Putin intended to divide the U.S. and its allies and partners.  We are stronger now than ever before.  Putin thought he could undermine or overthrow the Ukrainian government, but President Zelensky and the democratic collective government of Ukraine is still standing.  Russian forces lost the battle for Kyiv and have had to retreat and refocus elsewhere in the country.

From the start, the war has been the deep-seated desire of Ukrainians to live in a democracy and a free market.  Notwithstanding Russian propaganda, the Russian war with Ukraine is not about joining NATO and never has been.  It’s about accession to the EU.  Ukrainians are willing to risk “their lives and their sacred honor” to paraphrase our Declaration of Independence, on behalf of personal liberty.  A fight that resonates with all Americans as our founders did in 1776.

It is my privilege as U.S. Ambassador, to play a part in this process in Brussels.  Every sanction we propose, export control we enacted, every arms delivery we organized, every refugee we helped to save, is a part of the struggle of autocracy versus democracy.

As I close, I would like to leave you and our leadership here today with one fundamental thought and a related question which I hope we will address today.

I came to this job in January with one set of assumptions about the EU, and especially its relationship with the United States.  But after the cauldron I have lived through in Brussels because of the Ukraine War, I have seen those presumptions fundamentally challenged.

I came to Brussels assuming that I would focus on the EU basically as an economic institution.  My job was to look at the EU primarily as a forum for discussing common policy issues across the Atlantic on trade and technology, from the Privacy Shield and the global minimum tax to the rule of law, anticorruption in Hungary, Poland and Romania.  Security issues were for the most part the responsibility of NATO.  That’s what I was taught.

The EU is, for sure, an economic union.  Indeed, the preeminent multilateral institution in that space in Europe and our primary interlocutor on those issues for Europe.  What I came to believe, however, in the last 90 days — and I’m anxious to hear your thoughts on this — I’ve come to believe as a result of what has happened in that period, the EU is now an indispensable security institution.

While NATO is clearly the preeminent Transatlantic military institution, once the decision was made — appropriately I might add — to not go “kinetic” in Ukraine, not to send NATO into Ukraine, the EU all of a sudden became a primary forum for protecting Transatlantic security.  While NATO would keep the war from spreading into NATO territory as President Biden likes to say, “not one inch of NATO territory will be at risk”, the primary institution for holding Russia accountable for its acts, to downgrade its economy and its military capability into the future, to arm the Ukrainians and to deal with the collateral consequences for this war — humanitarian, food crisis, and blunting asymmetric activities by the Russians in the Balkans, or disinformation in cyber — is the EU, not NATO.

That is a revolutionary thought.  Not only did we begin at the EU drafting financial sanctions and export controls and then scale them up for the rest of the world; but coordination of arms deliveries by the U.S. and the 27 EU member states to Ukraine is not through NATO, but through EUCOM, the European Command of the U.S. military and the European Council, European Commission.

In the case of the EU and its member states, it’s a two billion euro European Union Fund that is paying for these arms.  It is these sanctions and controls which will hopefully eventually shut down the Russian war machine and call off the military and the Russian economy from the technology that they are almost completely dependent on.  It is those arms that courageous Ukrainians used to win the battle of Kyiv.

It is our coordination on refugees, humanitarian aid, securing agriculture for the largest breadbasket in the world that is essentially a security challenge.

Let’s talk today about how we did that and how we can do it better.  And most important, what are the upcoming challenges, security challenges, that the EU will have to face?

But most importantly, let’s discuss how we should think about the EU and NATO in this context or better yet rethink them.

How do we change the perception of the EU’s new security role, and what risks there are in that role, and how do we think about it in the context of NATO’s role?

These are difficult and not easy questions to answer, so it is my great pleasure to join you today to celebrate an important program, one that recognizes that one of the greatest partnerships in the world is the Transatlantic relationship and also I hope to get your advice on how to answer these questions.

May your future endeavors ensure not only the strength and endurance of the relationship, but of the democracy and democratic values at its core.  Thank you very much.