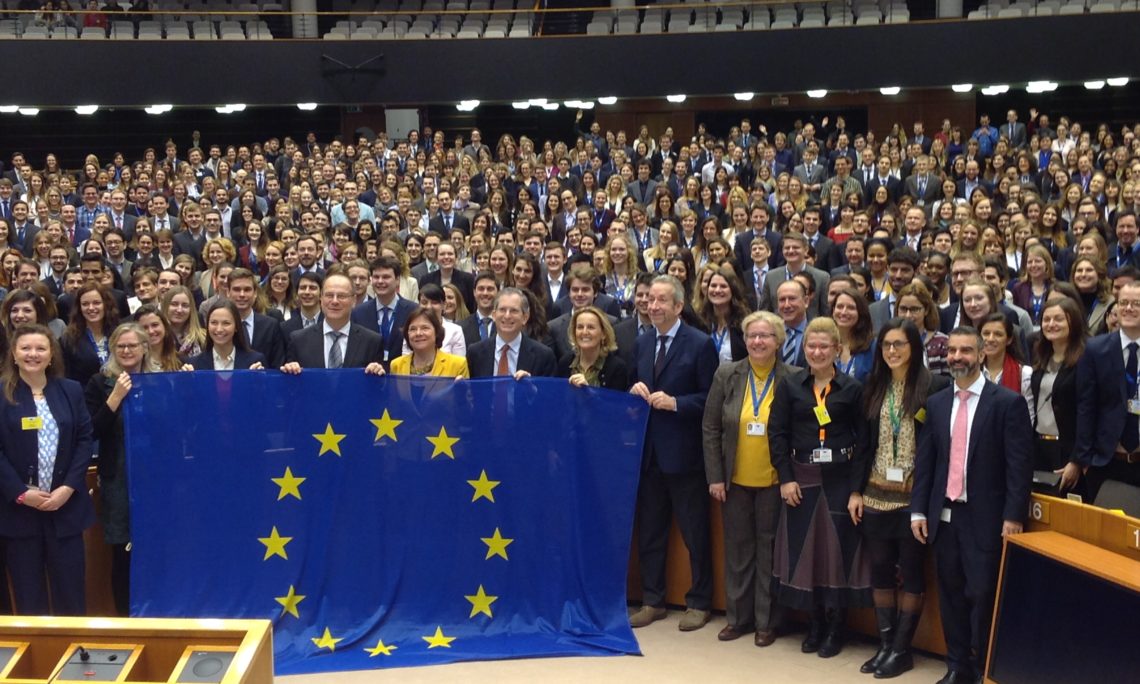 It is a relief to be here and not speak about the US election campaign. As a representative of the US Government, I have to be strictly neutral. So I’ll simply say this: as a public service the United States will continue to provide free high-quality entertainment on a 24/7 basis for the whole world, including Europe, for the next 8 months…You’re welcome, by the way.

Shortly after I was nominated as Ambassador to the EU, I heard a story at the State Department about how former US Secretary of State George Shultz used to call new ambassadors into his office. He would ask them to point to their country on a big atlas. Almost invariably the ambassador would point to the country to which he or she had been named. Shultz would explode: “That’s not your country!” Pointing to the United States, he would shout: “This is your country, and don’t you ever forget it!”

Well, I haven’t ever forgotten that. But it’s also true that I feel a little bit like a local here. My arrival in Brussels two years ago was a welcome return to a city I know well. I arrived for the first time in October 1990 to work as an intern in DG COMP, then DG-IV, in the European Commission. I was living on Rue Stevin and had a short walk to the offices on Avenue Cortenbergh.

The US Trade Representative Mike Froman also did a stage, although in the Cellule de Prospective, a version of today’s European Political Strategy Centre. I am working closely with him on the negotiations concerning the Transatlantic Trade and Investment Partnership Agreement. So beware: 20 years from now some of you may be in Brussels working with people who have also been stagiaires, perhaps at the same time as you.

My internship was so positive that I stayed to work on EU competition and anti-dumping law in a Brussels law firm. I was lucky enough to find my first apartment on the third floor of the Wittamer building on the Place du Grand Sablon. Every day I would return from work to find chocolates and pastries on a tray outside my door with a note from Madame Yvonne Wittamer. Perhaps this sweet experience explains why I became a believer in the European project, and why I have remained so ever since – in spite of the existential challenges the project has faced.

It has always been an error to underestimate the EU’s political will, especially at times of crisis. On the occasion of the 25th anniversary of the Treaty of Rome, The Economist featured a front cover with a cartoon of a tombstone dedicated to the EEC. The inscription on the tombstone said: “Born 25 March 1957, moribund March 25, 1982.”

Predictions of the EEC’s death were wildly exaggerated: a few years later it embarked on the single market project. Predictions today of the EU’s demise are similarly exaggerated.

I have remained a believer in the European project in spite of the 14 years I lived in London before arriving here. On one typical rainy day in London, when I was rushing for a bus, I saw the headlines of a tabloid newspaper claiming that a terrible plot of the European Commission had been exposed. Out of curiosity, I rushed to the newspaper stand to buy a copy. The story claimed that the European Commission had been plotting to merge Southern England into Northern France to create a new country with its own flag and anthem.

No, the article was not written by Boris Johnson, but it could have been. I got to know Boris at Oxford and we lived in Brussels at the same time in early 1990s when he was writing articles for The Daily Telegraph about the devilish plans of The Commission to abolish the prawn cocktail crisp and curved cucumbers.

Although I was nominated shortly after the President’s re-election, I had to go through a rigorous vetting process. The fact that I have lived half my life in Europe, including the last 14 in London, with a Spanish wife caused some unexpected complications. The disclosure form to the FBI was 281 pages by the time I finished it. Why? Well, I was asked to provide 15 years of travel records. But the real challenge was the following question: “Have you had close and/or continuing contact with a foreign national within the last 7 years with whom you or your spouse are bound by affection, influence, common interests and/or obligation?” I was tempted to ask whether I needed to disclose every close contact with my Spanish wife, but I decided not to.

Shortly after I arrived I had to go to the Berlaymont to present my credentials to Presidents Barroso and Van Rompuy. I was met by the very amiable head of protocol, Nicolas de la Grandville. “We must do something about this stage program,” he joked, “because people like you and Mike Froman reappear after many years knowing the inside of this place.”

I have had a full agenda since my arrival. I have spoken about TTIP about 70 times in half of the EU’s member states. I have had the pleasure of seeing TTIP opponents dressed as giant chickens and Trojan horses; I have heard them drown out debate with songs from Les Miserables.

There are many other issues on the US-EU agenda. The risk of Brexit is one of them. A few weeks ago I had the pleasure of appearing before the House of Commons Select Committee on Foreign Affairs to speak about the impact of Brexit on third countries. I prefaced my remarks by saying that I have believed in the European project for about 25 years. Their faces turned white as a sheet. One of its members said: “Mr. Ambassador, you don’t understand: the EU is a totalitarian super state that has enslaved the UK, and it is time for us to break free.” I don’t recognize that description of the EU.

One of my predecessors, Stuart Eizenstat, recently described the EU as “the greatest, most successful experiment in world history, in binding together a former war-torn continent into a peaceful, democratic, free market tolerant group of member states, through shared and pooled sovereignty and mutual respect.” I fully subscribe to that description.

US Secretary of State John Kerry recently said that the United States favors a strong UK in a strong EU; President Obama has said so on several occasions; and Mike Froman has stated that the US will prioritize the negotiation of free trade deals with regional groupings over deals with individual states. Clearly, the decision in the referendum is one for the UK to make; we respect the democratic process and cherish the special relationship. Our support for a strong UK in a strong EU is widely held on a bi-partisan basis; US support for a strong and unified Europe dates back to the Kennedy Administration. And we are not alone: other close allies have voiced similar views. Recently the G-20 finance ministers expressed the view that Brexit would be a shock to the world economy.

American columnist Tom Friedman recently wrote in a column that putting “European Union” into the lead of a column published in America is like a “Do Not Read” sign. That has changed last year and this year because what is going on in the EU (not only relating to Grexit, Brexit and migration) is important, not only for the region, but for the US and even for the world.

I am reminded literally every day that the United States and the European Union are essential partners in a turbulent world. On almost every significant regional and global issue of concern the EU is playing a key role. Here are a few brief examples.

The US and Europol, the EU’s law enforcement agency, already collaborate, for example in cracking down on online child sexual exploitation, human smuggling, drug and weapons trafficking, cybercrime even counter-terrorism.

The US and EU have been partners in implementing sanctions around the world. We quickly announced and repeatedly renewed, in close partnership with the United States, a set of extensive sanctions against Russia in response to Russia’s illegal annexation of Crimea and aggression in Eastern Ukraine. We need to renew these sanctions again in June.

And we are making significant, even surprising, progress with the EU on the security front. For example, we have signed agreements for the exchange of confidential military information and the sale of goods and services by the Department of Defense to the EU Military Staff.

We have worked closely with the EU on the historic climate change agreement in Paris and on the historic agreement limiting Iran’s nuclear ambitions. We are collaborating closely on improving Europe’s energy security by diversifying supply and transmission routes. It is of crucial importance that Russia stop being able to use energy as a political weapon to divide and weaken Europe.

We are working closely with the European Commission on its key projects, including the Digital Single Market and Capital Markets Union. These are the right areas of focus, with hugely beneficial consequences for both sides of the Atlantic. We are also seeking to share our experiences in the field of migration, including border control, identification of refugees, resettlement and integration.

And, of course, the US and the EU have worked closely on their international trade agenda, including on the recent breakthrough to significantly expand the coverage of the Information Technology Agreement that eliminates tariffs on $1 trillion worth of trade in high-tech products among 54 economies. We are also spearheading negotiations on the Environmental Goods Agreement and the Trade in Services Agreement. We are going to try to conclude TTP before the end of President Obama’s term. It is essential, not only to promote jobs and grown, but to set the rules for global trade.

There is so much to do, and you have a role. You will have to fight for a European future, for European solidarity. The migration crisis, just like the financial crisis, has proven that there is need for more Europe, not less. Solidarity is not a one-way street: something that Member States receive, without giving in return. Brussels bashing can be fun, but it is an insult to European history.

I’m not just referring to the wars on European soil that you see in films and read about in history books. I’m referring to the relatively recent history of border controls that are reappearing. I’m talking about the relatively recent history of national currencies, of expensive intra-European travel and of complicated requirements for study and living outside one’s home country; of restricted consumer choice regarding many goods and services.

And I’m referring to relatively recent history in which thanks to the hugely beneficial process of enlargement Greece, Portugal, Spain and former Soviet satellites were transformed into flourishing members of a united, democratic and prosperous Europe.

Despite all the serious challenges that Europe is now facing, remember this: millions of people are risking their lives by land and sea to make a better life here. Europe is still a beacon of hope and opportunity.

We must resist the politics of fear and division that are afflicting Europe and the United States. Resist the ideologues and demagogues who are crowding our television screens. These EU institutions have served, are serving and I hope will continue to serve a noble purpose. The European ideal needs believers and supporters as never before; you are needed.

Thanks for your attention and good luck.